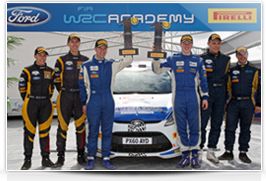 Alastair Fisher from Northern Ireland has won the opening round of the 2012 FIA WRC Academy, which is exclusively supplied by Pirelli, on Rally Portugal.

The event was one of the toughest in recent memory, with so much rain and mud that the entire loop of three stages on Friday afternoon was cancelled following several delays in the morning. Despite these extreme conditions, Pirelli’s K4 gravel tyre – which will be used on all the loose-surface Academy rounds this year – performed perfectly on the challenging stages, cutting through the layer of surface mud in order to find traction on the firmer ground below.
Pirelli’s WRC Academy tyres – which were developed especially for the Ford Fiesta R2 used on the one-make series – do not benefit from anti-deflation mousse, but despite the rough roads and stones washed up by heavy rain there were only three slow punctures throughout the three-day event, none of which caused any time loss to the competitors.
Fisher, entering his second year of the WRC Academy, won the rally by 40.3 seconds from Australian driver Brendan Reeves: also in year two of the Pirelli-backed series. Norwegian Pontus Tidemand (the stepson of WRC driver Henning Solberg) was third and top WRC Academy rookie.
Fisher, aged 23, commented: “It’s been a very tough rally that’s been all about controlling the pace. On an event that is as demanding as this one, the tyres play an absolutely crucial role and I was very impressed by both their performance and their strength, even though the conditions were hardly ideal. The stages were very rough, and it would have been so easy to have a puncture. The Pirelli K4 was extremely effective at dealing with all the mud, allowing us to maintain control even when so many people were going off.”
WRC Academy regulations restricted each driver to 18 tyres for the entire event and the four-hour pre-rally test, in one pattern and compound only. Fisher claimed the lead on Friday morning, after Sweden’s Fredrik Ahlin set the early pace. With points also on offer for winning stages, the accent is firmly on speed and talent.
Pirelli’s WRC Academy tyre engineer Matteo Braga said: “The first round of the Academy was certainly filled with action, and conditions that go beyond what we would normally expect from this event. Even though the weather was extreme, the K4 tyres coped extremely well with some of the biggest challenges that they have ever faced. Congratulations to Alastair and all the other finishers: just getting to the end of this rally was an achievement in itself, and we’re delighted to see the WRC Academy highlighting the talents of the rally stars of the future. The conditions last year were easier here, yet this time there were fewer retirements: proof of the maturity displayed by all our young drivers. Pirelli has been involved continuously in the World Rally Championship since it was founded in 1973, and it is a privilege to continue this engagement in 2012 with the spotlight on youth.”
The next event for the Pirelli-supplied WRC Academy will be the Acropolis Rally from May 25-27, where the K4 tyre will be seen in action once more on the hot and rough roads of Greece.