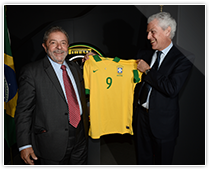 Luiz Inácio Lula da Silva visited Pirelli’s headquarters in Milan.  The former president of Brazil, accompanied by the chairman of Pirelli Latin America Paolo dal Pino, was received by the company’s Board of Directors and by the Chairman and CEO Marco Tronchetti Provera.  During the meeting, Lula visited Pirelli’s main Research & Development centre, where all Pirelli tyres are designed and tested, and met the workers’ representatives. He then visited the Pirelli Foundation, which houses and preserves documents and images of the company’s history, from its foundation in 1872 to present days. Lula, in conclusion, illustrated to the Board of Directors the current situation of South America, a strategic business area for Pirelli. Present in South America since 1910, Pirelli celebrates its 85th anniversary in Brazil this year, a country where the company today has 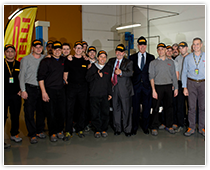 five factories (in Santo André, Campinas, Sumaré, Gravatai and Feira de Santana), producing the entire tyre range and employing over 12,000 people. Pirelli, moreover, is present also in Argentina and Venezuela with one manufacturing plant. In the South American region alone, Pirelli employs almost 14,000 workers out of the total of 38,000 worldwide. Latin America accounts for around 35% of Pirelli turnover and between 2014 and 2017, as indicated in Pirelli’s latest industrial plan, almost 400 million euro will be invested for further development in the region.