Formula 2 to race on medium and soft tyres in Hungary, with GP3 on medium

The FIA Formula 2 Championship and GP3 Series, both supplied by Pirelli, head next to the Hungaroring, known for its tight and twisty layout.

Next week, there will be a Formula 1 test at the Hungaroring with a number of drivers from Formula 2 and GP3 getting a chance to drive at the very top level: including Charles Leclerc, George Russell and Gustav Malja.

Mario Isola: “Although the speeds are relatively low, the Hungaroring works the tyres hard throughout the lap. This has been considered with our selections of the medium and soft compounds for Formula 2 and medium for GP3, with the intention that as usual drivers will have to display some degree of tyre management: an important skill for them to learn on the way to Formula 1. It could also help to create close racing at a circuit where overtaking is not easy.”

The challenge for the tyres:

The Hungaroring layout is likened to ‘Monaco without the barriers’, and the average speeds are low. However, with few straights and many corners, the tyres are being constantly worked during the lap with traction, braking and lateral forces.

The lack of straights means teams can run with maximum downforce, but given the relatively low speeds, there is an emphasis on mechanical grip from the tyres rather than aerodynamic grip.

The track was resurfaced last year; with the asphalt one year older the grip characteristics may have changed.

The temperatures are often very high in Hungary in July, so thermal degradation can be a factor, particularly as there is no rest for the tyres, with corner after corner. Rain can be common as well.

The race and the rules: Formula 2 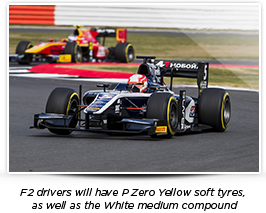 Every car will have five sets of dry tyres and three sets of wet weather tyres available for the Formula 2 race weekend. The five sets of dry tyres comprise three sets of the medium compound and two sets of the soft compound.
The drivers can use their tyre allocation in any way they like, but at least one set of each compound must be used in the feature race (unless it is a wet race). One set of the harder compound must be returned after free practice.

Qualifying takes place at 15:55 on Friday, after practice at 11:55. The feature race on Saturday at 16:00 lasts 37 laps and each driver must complete one compulsory pit stop. This cannot take place within the first six laps. Unlike Formula 1, the drivers do not have to start the race using the tyres they qualified on.

The grid for the sprint race on Sunday at 10:20 is determined by the finishing order of the first race, with the top eight positions reversed. It is run over 28 laps, with no compulsory pit stops. 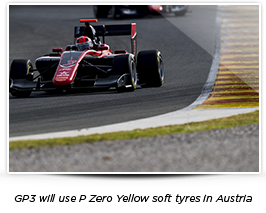 Every car will have three sets of dry tyres and two sets of wet weather tyres available for the GP3 race weekend. Only one compound is nominated: medium for this weekend. The drivers can use the tyre allocation in any way they like.
Drivers are allowed to carry over one tyre set from the previous round for use in free practice only. This will be the hard tyre from Silverstone.

Qualifying takes place at 09:45 on Saturday morning, after a single free practice session on Friday at 17:50. Race 1 starts at 17:35 on Saturday and lasts for 22 laps, followed by Race Two at 09:10 on Sunday (lasting 17 laps). The grid for Race 2 is determined by the finishing order of the first race, with the top eight positions reversed.

Formula 2 to race on medium and soft tyres in Hungary, with GP3 on medium
Newsroom