The FIA Formula 2 Championship drivers will have the P Zero Yellow soft and P Zero Red supersoft tyres at their disposal in the fifth round of the season at the Red Bull Ring in Austria. The GP3 Series will also be in action for round two of 2017, with the P Zero Yellow soft tyre to be used throughout the weekend. Pirelli’s head of car racing says: Mario Isola: “Just like in Formula 1, we have selected the softest compounds in the ranges for Austria: soft and supersoft for Formula 2 and soft for GP3. This is the natural choice for a circuit where the demands on the tyres are relatively low, the third such circuit in a row for Formula 2 after Monaco and Baku. For GP3 on the other hand, it represents a rather different challenge to Barcelona, with a tyre that is two steps softer than what they used in Spain.” The challenge for the tyres: The Red Bull Ring is a circuit that places relatively low demands on the tyres. There are few particularly fast corners, so the longitudal demands caused by accelerating and braking are more critical than the lateral forces. Turns 5 and 6, consecutive left-handers in the middle of the lap, do produce some lateral forces, with particular stress on the right-side tyres. The circuit has a very smooth surface, which was laid ahead of the 2016 races. It is therefore important to be able to have good traction, particularly when coming out of slow corners and onto long straights. The year-old asphalt might be slightly more aggressive than it was last year, as the ageing process often loses some of the surface bitumen. Given the Red Bull Ring’s mountainous surroundings, there is often a high chance of rain, as was the case in some of last year’s races. The race and the rules: Formula 2 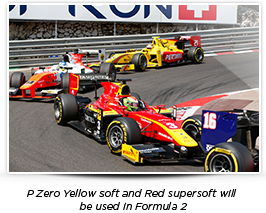 Every car will have five sets of dry tyres and three sets of wet weather tyres available for the Formula 2 race weekend. The five sets of dry tyres comprise three sets of the soft compound and two sets of the supersoft compound.
The drivers can use their tyre allocation in any way they like, but at least one set of each compound must be used in the feature race (unless it is a wet race). One set of the harder compound must be returned after free practice. Qualifying takes place at 15:55 on Friday, after practice at 12:00. The feature race on Saturday at 15:35 lasts 40 laps and each driver must complete one compulsory pit stop. This cannot take place within the first six laps. Unlike Formula 1, the drivers do not have to start the race using the tyres they qualified on. The grid for the sprint race on Sunday at 10:20 is determined by the finishing order of the first race, with the top eight positions reversed. It is run over 28 laps, with no compulsory pit stops. GP3

Every car will have three sets of dry tyres and two sets of wet weather tyres available for the GP3 race weekend. Only one compound is nominated: soft for this weekend. The drivers can use the tyre allocation in any way they like.
Drivers are normally allowed to carry over one tyre set from the previous round for use in free practice only, which would usually be the hard tyre from Spain. However, as this tyre is not especially well-suited to the Red Bull Ring layout, they will instead be allowed to use a carry-over set of medium tyres from the last test (which took place after Spain). Qualifying takes place at 09:25 on Saturday morning, after a single free practice session on Friday at 17:50. Race 1 starts at 17:10 on Saturday and lasts for 24 laps, followed by Race Two at 09:10 on Sunday (lasting 18 laps). The grid for Race 2 is determined by the finishing order of the first race, with the top eight positions reversed.

Copyright-free videos, photos as well as latest media news are available for editorial use from: www.pirelli.com/f1pressarea (registration required).
Follow us on Twitter @pirellisport or Facebook: Pirelli Motorsport. Please also visit the Pirelli website for more information on the company: www.pirelli.com.