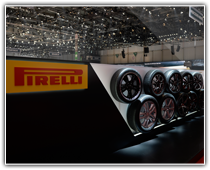 Pirelli has set a new record with one homologation per day, every day, throughout 2015 and now into 2016. Thanks to its perfect fit strategy, the Italian firm comes to the 86th Geneva Motor Show, equipping the most prestigious and eagerly-anticipated models with bespoke tyres. The increase in the development of tailor-made tyres for specific vehicles means that there have now been around 2200 Pirelli homologations in total on cars currently in circulation. This is an increase of 10% versus last September, when Pirelli broke the 2000 barrier at the Frankfurt Motor Show. This trend has continued throughout the first two months of 2016, making Pirelli the technical partner of choice for the world’s leading car manufacturers when it comes to future vehicle development. Among the stars of the Geneva Show, the Ferrari GTC4 Lusso wears bespoke P Zero tyres with a rolling resistance reduced by a full 15%. Also the Jaguar F-Pace required high levels of comfort and low rolling resistance, but with a sporty drive at the forefront as well: all satisfied by the Pirelli exclusive original equipment supplier in its 22-inch tyre. The Pagani Huayra BC runs on P Zero Corsa in 255/30ZR20 and 355/25ZR21 sizes, guaranteeing the new hypercar from Modena high levels of safety in all usage conditions. The new McLaren 570S GT will be exclusively equipped with P Zero and P Zero Corsa tyres, which have been specially developed by Pirelli’s engineers in sizes of 225/35R19 for the front and 285/35R20 for the rear. The unique characteristic of this tyre is the innovative PNCS (Pirelli Noise Cancelling System): a new technology patented by Pirelli that reduces road noise from the grooves within the tyre. 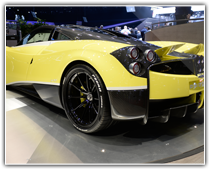 The bespoke tyres for the new Audi R8 Spyder are around 10% lighter than their predecessors. This reduction in weight has been achieved thanks to a reduction in suspended masses, which also means lower rolling resistance and therefore diminished fuel consumption. The latest BMW 7 Series wears run-flat P Zero tyres that have been specially designed to focus on two aspects: wet braking and mileage. Finally, Pirelli has equipped the Italdesign concept car that is making its world debut at Geneva, the GTZero, with PZero Nero, in 295/25 R22 size at the front and 315/25 R23 size at the rear.