Racing Engineering driver Fabio Leimer was crowned champion after a podium finish at Abu Dhabi, the final round of the GP2 Series. The Yas Marina circuit was also the final round of GP3, with Carlin’s Daniil Kvyat – who is bound for Formula One with Toro Rosso next year – clinching the championship. For GP2, the P Zero medium and supersoft tyres were nominated, while the GP3 drivers used the medium compound. For the 30-lap GP2 feature race on Saturday, Leimer was the top-placed driver to start on the supersoft tyres, in fourth. Caterham’s Alexander Rossi and championship challenger Sam Bird (Russian Time) went on medium tyres, occupying the front row of the grid, but Bird stalled at the start. The Englishman was nonetheless able to benefit from a safety car on lap one to rejoin the race at the back, having changed his strategy to switch to the supersoft tyre and try to make up places. Rapax driver Stefano Coletti was the first driver to stop and switch from the supersoft to the medium. He was followed by Bird on lap seven, who eventually finished 10th, having been last. Rossi pitted from second place on lap 18 and changed just the rear tyres. Carlin’s race leader Jolyon Palmer, who claimed the advantage at the start from third on the grid, pitted a lap later for four tyres: used supersofts. He rejoined just behind Rossi, who took his debut GP2 win after another safety car in the closing stages. Leimer finished fourth, after a close battle with Marcus Ericsson (DAMS), to claim the drivers’ championship. Rossi said: “We did a good job in the feature race; Jolyon and Carlin were really strong. Their ability to look after tyres was a little bit better than us, as mine went off three or four laps before his, so we had to make a call: whether to look for another podium at the sprint race on Sunday or go for glory at the feature race – and that’s what we did. We started on the mediums and just tried our best to get as far enough so we could go to a medium-supersoft strategy if we wanted, or stay on the medium and guarantee a podium.” While Bird missed out on the drivers’ title, his fourth place in the GP2 sprint race on Sunday was enough to ensure Russian Time the teams’ title. The 22-lap sprint race, with no pit stops, meant that the drivers had to make the most of their tyres by judging wear and degradation accurately in the searing heat of the Abu Dhabi daytime, in order not to lose time. ART driver James Calado led from start to finish after a brilliant getaway, using the medium tyre throughout the race. The 14-lap GP3 feature race on Saturday was the first one of the series ever to take place at night. Carlin’s Daniel Kvyat made an excellent start from pole, but had to do it all over again after a safety car on the opening lap. He held on to win and clinch the drivers’ championship. Facu Regalia (ART Grand Prix) ruled himself out of championship contention by finishing 16th, but ART won the teams’ championship. “Tyre degradation was lower than I expected so I could push a bit more,” said Kvyat after the feature race. “This was also really good and helped me a lot.” 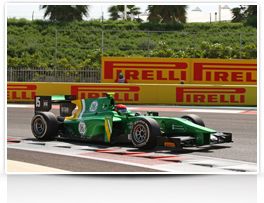 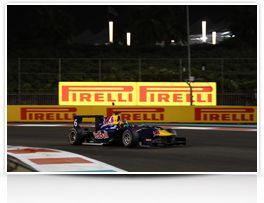 Marussia Manor Racing driver Tio Ellinas won the GP3 sprint race on Sunday from P2 on the reverse grid, which was again an exercise in ensuring that the medium compound tyres remained at their best over the whole race distance. In GP3 there are no mandatory pit stops, meaning that Ellinas just had to rely on his talent and nerve to maintain the lead under immense pressure, with Korainen GP’s Dean Stoneman a remarkable second on his return to single-seaters, just two-tenths of a second behind the winner. Pirelli’s racing manager Mario Isola commented: “With quite a big step between the two GP2 compounds selected for Abu Dhabi, strategy was important, with the supersoft almost playing the role of a qualifying tyre. In GP2 however, you do not have to start with the tyre you qualified on, so the strategic options are in some ways even more open than those in Formula One. Rossi’s strategy, in changing only the rear tyres, was fundamental to his feature race win but there was a close fight with Palmer who was on the faster compound. Congratulations to Fabio Leimer for winning the GP2 championship and to Daniil Kvyat for the GP3 title. All year, including once again this weekend, Daniil has shown that he is of the right calibre for Formula One, and we’re sure that he will have learned plenty about tyre management in GP3 that he will find very useful as he steps up to the top category. Congratulations also to Dean Stoneman who made a fantastic return to single-seaters on what is always a challenging track with variable temperatures depending on when each race is run.” Copyright-free videos, photos as well as latest media news are available for editorial use from: www.pirelli.com/f1pressarea (registration required). Follow us on Twitter @pirellisport or Facebook: Pirelli Motorsport. Please also visit the Pirelli website for more information on the company: www.pirelli.com. For further information please contact: Alexandra Schieren +33 607 03 69 03 alexandra.schieren@pirelli.com Anthony Peacock +44 7765 896 930 anthony@mediaticaworld.com Francescopaolo Tarallo +39 334 684 4307 francescopaolo.tarallo@pirelli.com (Head of Product and Motorsport Communication)