Pirelli GP2 and GP3 compounds rise to German challenge The Nurburgring presented a number of firsts, with Marcus Ericsson taking his first GP2 win of the year for DAMS, while Facu Regalia (ART) and Melville McKee (Bamboo) took their first career victories in GP3. The GP3 series has now had eight winners from eight races so far: similar to Pirelli’s benchmark in Formula One last year, when there were seven winners from the first seven races. For one of the most demanding races of the year, the GP2 crews had the latest P Zero White medium and P Zero Red supersoft compounds at their disposal, whereas the GP3 crews were using the medium compound. Tyre degradation can be a factor at the Nurburgring due to the circuit’s high lateral forces with several sweeping changes of direction, but both the P Zero rubber and the drivers coped well. Saturday’s 32-lap GP2 feature race brought success for DAMS driver Marcus Ericsson, who has set pole position twice this year, but was beaten to first on the grid in Germany by his team mate Stephane Richelmi. Ericsson claimed the lead on the first lap after starting on the mediums and pitted for another set of mediums on lap nine to eventually win the race from ART driver James Calado. The Englishman used a different strategy by starting on the supersoft tyre and then swapping to the medium on lap seven, following a safety car period at the beginning of the race. Championship leader Stefano Coletti clinched a sensational third place, having charged up from 13th on the grid by running a long first stint on the mediums until lap 19 to gain track position on his rivals. As a result the Rapax driver extended his championship lead, following two stints on the mediums which he described as “probably the best race of my life; better than a win.” The sprint race on Sunday morning was won for the second consecutive week by Hilmer’s Jon Lancaster. The Englishman used a fresher set of medium tyres than his rivals to make sure of victory from P2 on the grid, underlining the importance of seeing tyre strategy in the context of the whole weekend. After the race he said: “We were already really good on the supersoft tyres yesterday. We managed to pit later than some of the people on the medium tyres, so our car is really good on the tyres and I understand them quite well I think.” In GP3 there were two new winners, who both got the most out of Pirelli’s versatile medium compound. ART driver Facu Regalia qualified on pole for Saturday’s feature race and claimed a lights-to-flag victory by managing his medium tyres perfectly. Second place for Marussia’s Tio Ellinas meant that the Cypriot extended his championship lead. As is the case for GP2, the grid for Sunday’s sprint race in GP3 consisted of the top eight feature race finishers reversed. Bamboo driver Melville McKee made a great start to take the lead from second on the grid. He won by just three-tenths of a second from Status Grand Prix’s Alexander Sims, who had started from pole. 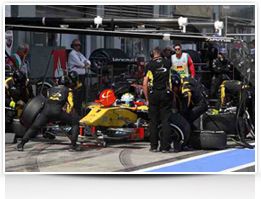 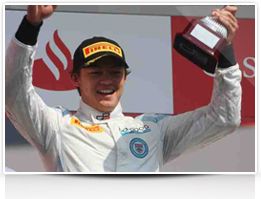 Pirelli’s racing manager Mario Isola commented: “It has been a very memorable weekend in Germany, and the way that the tyres worked in terms of wear and degradation were in line with expectations. Generally this was higher on Sunday than it was on Saturday because of significantly higher track temperatures, but the result was that we saw some absolutely fantastic racing. In GP2, we also saw a wide variety of race strategies with Ericsson and Calado both adopting completely different approaches to the feature race. The way that the drivers used their tyres on Saturday also impacted on their choices for Sunday, so we hope that the use of high-performance tyres with very different performance characteristics is enabling young drivers in GP2 and GP3 to learn as much as possible about the overall art of tyre management. From what we have understood so far this talented crop of young drivers quickly saw how to get the best out of them. The result has been some very good performances that maximise every opportunity, such as Coletti’s spectacular drive from 13th to the podium on Saturday.” The GP2 and GP3 crews will be in action next at the Hungaroring in Hungary from 26-28 July.