Pirelli’s P Zero GP2 and GP3 hard slicks enjoyed a successful performance running on their home ground of Italy during the final round of the 2011 GP2 and GP3 seasons, which were held this weekend at Monza alongside the Italian Formula One Grand Prix. 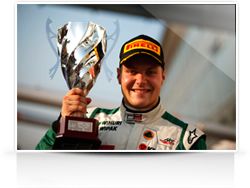 For Monza, Pirelli decided to equip the GP2 and GP3 drivers with its P Zero hard tyres in order to provide them with a durable rubber compound, suitable for the circuit’s high speeds and heavy braking areas. The hard compound tyres proved to be very well suited to the high ambient temperatures and severe demands that the Italian legendary track puts on the rubber, showing very good levels of performance and durability throughout the weekend. Pirelli’s Racing Manager Mario Isola commented: “After several wet races, we finally managed to enjoy some dry action with our slicks performing faultlessly at Monza on this famous high-speed track. Despite high longitudinal forces combined with high ambient temperatures, tyre blistering was not an issue beyond the usual tolerances. As the official tyre supplier, we provide the teams with recommended inflation pressures and camber settings in order for them to optimise the use of our tyres. They followed our suggestions, enabling the drivers to make the most of their rubber and enjoy this challenging track. On behalf of Pirelli, I wish to congratulate the teams and drivers for all the hard work they have done this season and I would also like to thank the GP2 and GP3 paddock for the warm welcome they have given us in our comeback to single-seater racing.” 2011 GP2 Champion Romain Grosjean (DAMS) commented: “Racing at Monza is always a fantastic experience and I enjoyed running on Pirelli’s hard slicks during this final round. It’s been an interesting 2011 GP2 season thanks to the Pirelli tyres, which have significantly spiced up the action. Personally, I think I’ve managed the new tyres pretty well from the beginning and improved my understanding of the different rubber compounds throughout the season. The tyre management skills I have developed running on Pirelli’s tyres certainly gave me a significant advantage in clinching the championship and will definitely be helpful for my future career.” 2011 GP3 Champion Valtteri Bottas (Lotus ART) commented: “I’m really glad to have won the title on my debut season. Everything went according to plan and I felt confident running on Pirelli’s hard slicks at Monza, though I still prefer the soft compound because of its peak of performance. Throughout the season, the team and I have done a great job to get a good understanding of the new rubber and to figure out the right car set-up. Now we’ll see what happens next; I wouldn’t mind running on Pirelli’s GP2 tyres next year!” The 2011 GP2 season draws to a close crowning Luca Filippi (Scuderia Coloni) as championship runner-up while the Barwa Addax Team wins the GP2 teams’ title. Romain Grosjean (DAMS) clinched the GP2 drivers’ title in Spa while Valtteri Bottas (Lotus ART) became the 2011 GP3 champion after winning Saturday’s race in Monza. His teammate James Calado is this season’s runner-up while Lotus ART secured the GP3 teams’ title after the Belgian round. Pirelli’s P Zero GP2 tyres will next be seen at the Yas Marina Circuit in Abu Dhabi, at the 2011 GP2 final. This will be held on November 12-13, running alongside the penultimate Formula One grand prix of the season. Pirelli will provide a prize drive at the event for the top two finishers in this year’s GP3 Series. For further information please contact Laura Bartoli on +44 7500 877 304 or laura@mediatica.co.uk