A second consecutive double from Tony Cairoli in MXGP, another clean sweep and one hand on the MX2 title for Jeffrey Herlings while Pirelli also taste success in European 300 and 250 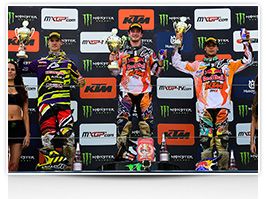 A ‘photocopy’ of the Grand Prix of Sweden for Antonio Cairoli as the Sicilian clocked his 72nd career victory with his fifth double success of the season. Racing with the SCORPION™ MX MidSoft 32F front and Soft 410 like the other Pirelli riders across the shallow and hard sand of Hyvinkää, the seven time World Champion stamped his authority over both motos in Finland by leading from the first corners until the last and has now constructed a 62 lead in the standings of the premier class with just four rounds remaining. Factory Suzuki rider Clement Desalle missed the thirteenth round of seventeen after still suffering pain and discomfort in the wake of his crash at the Grand Prix of Sweden the previous week. Yamaha’s Jeremy Van Horebeek was a protagonist again in Finland with second position in the first moto but then fell in the second and had to recover to tenth spot for fourth overall. Belgian pride was upheld by Suzuki’s Kevin Strijbos who classified third on the podium despite poor starts and some physical problems. 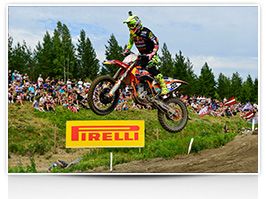 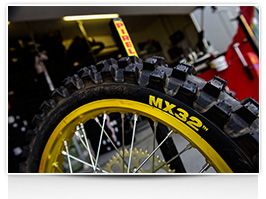 Thanks to his twelfth win of the season and continued dominance and speed in the MX2 category Dutchman Jeffrey Herlings is on the verge of his third consecutive title and only needs six points more than Jordi Tixier at the next round of the series to reconfirm his status as world number one. Cutting the Finnish sand so devastatingly on his works KTM, Herlings classified ahead of four other Pirelli riders: Slovenian HRC racer Tim Gajser, team-mate Jordi Tixier (who was in pain after a heavy Qualification Heat crash on Saturday), Dylan Ferrandis and Christophe Charlier. Using Pirelli SCORPION™ MX MidSoft 32F front and Soft 410 rear was leading contender in the European EMX300, Samuele Bernardini, who was victorious again. Triumph in EMX250 belonged to Brian Bogers. The Dutch youngster closed the gap in the championship standings to just 11 points behind another Pirelli runner Steven Clarke. Round fourteen of the FIM Motocross World Championship will take place on 27th July across the difficult hard-pack of Loket for the Grand Prix of Czech Republic. 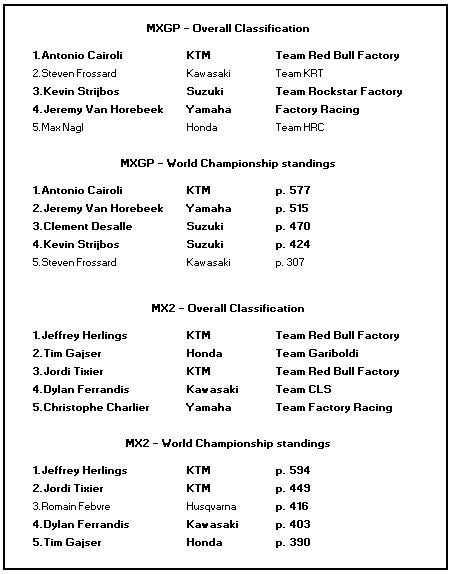 PIRELLI PRESS RELEASE
Pirelli is ready to face Portimão for the third round of the MOTUL FIM Superbike World Championship
2020 British Grand Prix - Race
At the Pirelli Spanish Round in Jerez Rea takes the Superpole® Race while Redding wins Race 2, Locatelli does the double in WorldSSP. The winning solutions in the Superbike range are confirmed, used b
2020 British Grand Prix - Qualifying
WorldSBK Pirelli Spanish Round Race 1: Scott Redding takes his first Superbike win, outstanding performance by the tyres in spite of the high temperatures
×