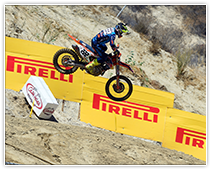 2016 was a perfect season for Pirelli with an annihilating fifteen wins out of eighteen in MXGP and seventeen out of eighteen in MX2, placing four riders in the top five of both classes and ending ‘16 with both world titles (MXGP and MX2), bringing the total number of World Championships won by Pirelli in motocross to a massive 66. The curtain fell on the last round of the FIM Motocross World Championship, the Grand Prix of USA, hosted on the Californian track of Glen Helen. The American track presented a hard-base terrain with a loose and sandy top layer across a demanding and spectacular layout. For all Pirelli riders - in both MXGP and MX2 categories - the tyre choice came down to SCORPION™ MX32™ Mid Soft, front and rear; a tyre that on this occasion proved its excellent performance by facilitating yet another victory for Jeffrey Herlings in MX2 and podium positions for Antonio Cairoli and Tim Gajser in MXGP. 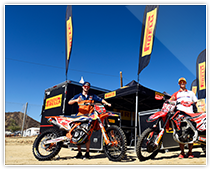 Cairoli was a superb runner-up in MXGP. The Italian former winner showed his skills in two lively heats, finally competing without being hampered by any physical problems. Freshly crowned World Champion Gajser finished the race on the same points as Max Nagl but was awarded with third place thanks to his superior ranking in the second moto. Herlings dominated both races in MX2 leaving his opponents to fight for the second place. Max Anstie took fourth overall and led Jeremy Seewer in fifth. The Swiss rider ended the championship as runner-up behind the unbeatable Herlings.