Grasser also took the overall teams’ title, although the Endurance Cup teams’ prize went to Bentley Team M-Sport – consolation for missing out on the drivers’ crown with Vincent Abril, Maxime Soulet and Andy Soucek. Strategy helped the #88 AKKA ASP Mercedes-AMG GT3 to win the Barcelona race, after local driver Daniel Juncadella used a longer first stint on the Pirelli P Zero DHD tyres to move into the lead after starting fourth. Team-mates Felix Serralles and Tristian Vautier then stayed out front ahead of the #17 Team WRT Audi of Stuart Leonard, Jake Dennis and Robin Frijns that started on pole position, with only 0.719 seconds between the two cars at the end of three hours of racing. 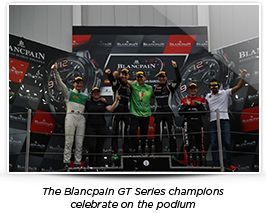 Quotes: Matteo Braga (Pirelli circuit activity manager): “Despite the characteristics of the Barcelona circuit, which is very demanding in terms of tyre consistency, we saw a close battle throughout the race with different brands fighting for the lead. The top five cars were still fighting for their positions and extracting performance from their tyres until the last lap. The conditions have been mixed this weekend, and the start of the race was tricky for the drivers on slicks on a damp track, but there were very few incidents, proving the adaptability of our product. Congratulations to the champions in all the classes and to everybody who has helped deliver such a good show this season.” Andrea Caldarelli (GRT Grasser Racing Team, #63 Lamborghini Huracan GT3): “We did a great season: we didn’t do many mistakes and this is the result. I feel really happy and proud of what we have done. I only joined the team in March and I never raced in GT3 before. I really enjoyed my stint: at the beginning, the fight with the others was really nice and after that I was just trying to keep third position. We didn’t feel big degradation from the tyres and they were quite consistent through the whole stint.” Fact of the day: Grasser’s titles are the first outright Blancpain GT Series championships achieved by Lamborghini. The famous Italian supercar maker has a relationship with Pirelli that dates back to 1963, when Ferruccio Lamborghini asked Pirelli to equip the first vehicle produced by his company. Today, Pirelli equips all new Lamborghini models, including the Huracan. Number of the day: 6309. The number of kilometres of racing completed by the championship-winning #63 GRT Grasser Racing Team entry across the Blancpain GT Series season.