Fresh from some close races at the Red Bull Ring in Austria, the FIA Formula 2 Championship and the GP3 Series head straight to Silverstone, with track action starting on Thursday at the home of the British Grand Prix. With its high speeds, Silverstone is one of the most demanding circuits of the season on the tyres. With this in mind, the P Zero Orange hard and P Zero Yellow soft tyres have been nominated for use in Formula 2, with GP3 to race on P Zero Orange hard. Pirelli’s head of car racing says: Mario Isola: “The nature of Silverstone puts high demands upon the tyres, and this is reflected in the compounds we have nominated for this weekend, which are the same as last year. In Formula 2, supplying the hard and soft tyres will create a significant difference between the two compounds. The soft will provide the performance in qualifying but will need to be managed during the race. In GP3 we provide the hard tyre to handle the high energies, but there should as always be an element of degradation for the drivers to master.” The challenge for the tyres: Silverstone’s most notable features are high-speed corners, such as Abbey and Copse as well as the famed Maggots and Becketts sequence. These all place high lateral loads on the tyres. The tyres are also subjected to considerable vertical loads as the teams set the cars up with maximum downforce at Silverstone to aid cornering speeds. Temperatures can vary considerably at Silverstone, even within the same day. If it’s hot, this can combine with the large forces to produce high surface temperatures, leading to thermal degradation. There is also the threat of rain, which could influence strategies. The race and the rules: Formula 2 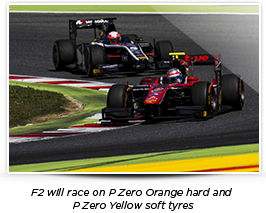 Every car will have five sets of dry tyres and three sets of wet weather tyres available for the Formula 2 race weekend. The five sets of dry tyres comprise three sets of the hard compound and two sets of the soft compound.
The drivers can use their tyre allocation in any way they like, but at least one set of each compound must be used in the feature race (unless it is a wet race). One set of the harder compound must be returned after free practice. The schedule is slightly different to normal this weekend, with practice taking place on Thursday at 15:30, before qualifying at 15:15 on Friday. The feature race on Saturday at 15:00 lasts 29 laps and each driver must complete one compulsory pit stop. This cannot take place within the first six laps. Unlike Formula 1, the drivers do not have to start the race using the tyres they qualified on. The grid for the sprint race on Sunday at 09:20 is determined by the finishing order of the first race, with the top eight positions reversed. It is run over 21 laps, with no compulsory pit stops. GP3 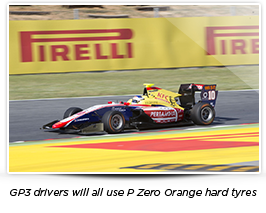 Every car will have four sets of dry tyres and two sets of wet weather tyres available for the GP3 race weekend. Only one compound is nominated: hard for this weekend. The drivers can use the tyre allocation in any way they like.
Usually, drivers are allowed to carry over one tyre set from the previous round for use in free practice only, but instead of carrying over the soft from Austria, teams will get a fourth new set of the hard compound. GP3 will also have their practice session on Thursday, at 16:45, and will qualify at 16:05 on Friday. Race 1 starts at 16:30 on Saturday and lasts for 20 laps, followed by Race Two at 08:10 on Sunday (lasting 15 laps). The grid for Race 2 is determined by the finishing order of the first race, with the top eight positions reversed.