Pirelli helped its drivers show their speed on the fast stages of Rally Poland on round seven of the World Rally Championship. Reigning European Rally Champion Kajetan Kajetanowicz produced a superb fightback on home soil on his WRC debut, finishing fourth in the WRC2 class as the lead Pirelli runner in his category. He had fallen as low as 17th in the class on the opening day as the result of braking issues on his Ford Fiesta R5 caused by an impact in the deep ruts that form on Rally Poland’s soft gravel tracks. Despite unfavourable road positions, Kajetanowicz set consistent and quick stage times over the following two days to climb the leaderboard and finish as the top Polish driver in 16th overall. 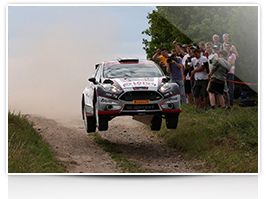 Kajetanowicz started the final day sandwiched between Pirelli’s WRC2 regulars Nicolas Fuchs and Armin Kremer, but delays relegated Fuchs to eighth and Kremer sadly failed to finish. Italian privateer Lorenzo Bertelli was the best Pirelli finisher overall, only just missing out on points after a solid run in his Ford Fiesta RS WRC. Along with Kajetanowicz, another of Pirelli’s European championship stars proved his ability on a rare WRC appearance: Marijan Griebel fought for victory in the well-supported RC4 category and finished up second in his Opel Adam R2. The young German was preparing for the next round of the Pirelli-supplied ERC Junior Championship in Estonia later this month, and had 17-year-old Ella Kremer (daughter of Armin) in the co-driver’s seat for the first time. Over the first two days, the stages were dry and fast, but weather conditions turned on the final day and rain brought muddy roads more reminiscent of Wales. The Pirelli Scorpion K tyres available in both soft and hard compounds offered the drivers speed, stability and strength in all conditions. Despite the complexity of the terrain, none of the drivers experienced any punctures or other tyre-related issues. Pirelli’s rally activity manager Terenzio Testoni commented: “Kajto drove very well on his WRC debut, recovering from the early problem to take a strong result. On the fast roads of the opening two days and the muddy conditions at the end, our Scorpion K tyres allowed the drivers to perform as well as possible. This was a tough rally but we experienced no problems, giving our drivers grip and traction when it mattered most.” Even higher speeds will be expected on the next round of the World Rally Championship, the famous Rally Finland from July 28-31.