In one book the relationship between art and Pirelli 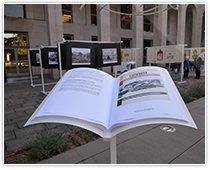 Retracing the relationship between art and Pirelli through 450 images – produced between the 19th and 20th centuries – by over 200 internationally famous artists to advertise Pirelli tyres and tocelebrate the group’s industrial anniversaries and illustrate the magazine “Pirelli”, whose pages, from 1948 to 1972, hosted articles, illustrations and images from the stars of literature, journalism, photography and Italian art. This is the meaning of the volume “A MUSE IN THE WHEELS. Pirelli: a century of art at the service of its products”, edited by Corraini Edizioni thanks to a project developed by the Fondazione Pirelli and curated by Giovanna Ginex. The book, available in Italian and English, contains over 448 pages which revisit the dialogue with art which has characterised the history of Pirelli for over a century. It was an intense and fertile dialogue begun by Pirelli shortly after its foundation when, in 1872, it tasked the painters and designers of the day with the illustration of its industrial spaces. In a short space of time, illustrative skill was combined with innovative advertising campaigns for the company, a distinctive feature of Pirelli’s advertising beginning in 1907. The most important names in graphics and painting – Marcello Dudovich, Leonetto Cappiello, Marcello Nizzoli, Pavel Michael Engelmann, and then, from the 1950s onward, Bruno 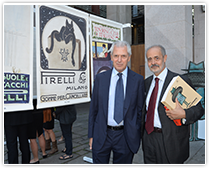 Munari, Alessandro Mendini, Armando Testa, Bob Noorda, Alan Fletcher, Riccardo Manzi and many others – characterised Pirelli’s advertising throughout the 20th century. As part of Pirelli’s ongoing cultural story, a new project has been launched in collaboration with Corraini. Based on the indications of the most prestigious professionals and teachers of the most important national and international graphics and design schools, Pirelli and Corraini will involve a select team of young talents with diverse backgrounds and skills to produce new representations and stories for Pirelli and its products.

In one book the relationship between art and Pirelli
Newsroom