In Portimão Kawasaki shows four-of-a-kind, winning in all four WorldSBK categories with Rea in Race 2 and Sofuoglu and WordSSP

The Northern Irishman does the double to get even closer to his third WorldSBK title, Sofuoglu moves into the WorldSSP Championship lead and in WorldSSP300 the historic win goes to Ana Carrasco; Pirelli already hard at work for the official tests on Monday 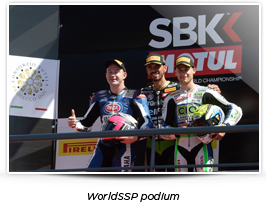 For Kawasaki, the weekend that just ended at the Autódromo Internacional do Algarve in Portimão was definitely one to write home about: in fact, the manufacturer from Akashi won in all four of the MOTUL FIM World Superbike Championship.

In the premier class, Jonathan Rea (Kawasaki Racing Team), thanks to an outstanding performance in both Race 1 and Race 2, took his eleventh victory and fourth double win of the season. With 150 points still up for grabs and an advantage of 120 points in the overall standings over teammate Tom Sykes, his closest competitor, the Northern Irishman has made a strong claim to the world title. Also winning was Kenan Sofuoglu (Kawasaki Puccetti Racing) who, after a troubled season start, in Portimão moves into the lead of the FIM Supersport World Championship and can now give it his all along with the other title contenders in the remaining three races. The FIM Supersport300 World Championship held a pleasant surprise where, for the first time ever, a woman was on the top step of the podium - Spaniard Ana Carrasco astride her team ETG Racing Kawasaki Ninja 300. Rounding out an already perfect weekend was Toprak Razgatlioglu (Kawasaki Puccetti Racing) who gave Kawasaki yet another win in the FIM Superstock1000 European Championship race.

At the end of the weekend, the Pirelli motorsport team is already busy getting ready for the official tests, the last ones of the season, that will be held tomorrow here at the Autódromo Internacional do Algarve in Portimão where all the WorldSBK category teams will be participating. The development team designated by each motorcycle manufacturer at the beginning of the year will be called on to test various development solutions, especially soft compound rear tyres developed both to renew the 2018 range and for the first, demanding round of next year at Phillip Island, Australia.

Race 2 of WorldSBK was the final event of the day on Sunday, starting at 3:00 PM local time. Stefan Bradl was not on the grid due to a crash during warm up. Leon Camier started from the first spot astride his MV Agusta, but by the end of the second lap he was already forced to yield the race lead to Jonathan Rea (Kawasaki Racing Team) who, in the meantime, had worked his way up from ninth to first place. Behind the Northern Irishman were initially Eugene Laverty (Milwaukee Aprilia) and Chaz Davies (Aruba.it Racing – Ducati) who inverted positions a few laps later. On lap thirteen the red flag came out due to a bad crash by Alex Lowes (Pata Yamaha Official WorldSBK Team) but the marshals were able to get the bike safely off the track, thereby avoiding the need to stop the race. Just after the mid-race point, Michael Van Der Mark (Pata Yamaha Official WorldSBK Team) managed to overtake Laverty, moving into third place. During the eighteenth lap, Chaz Davies crashed and was forced to retire from the race, thereby also losing his chances of overtaking Tom Sykes in the overall standings. At the end of the race it was once again Jonathan Rea who finished first ahead of an outstanding Michael Van Der Mark on his Yamaha and Marco Melandrion his Ducati.

At 12:00 noon local time, the FIM Supersport World Championship race got underway. With 36°C asphalt temperatures, most of the riders opted for the standard soft solutions both on the front and on the rear. Kenan Sofuoglu (Kawasaki Puccetti Racing), despite taking pole position on Saturday, was unable to take advantage of his start from the front of the grid, slipping back to fourth position. Starting very well from the third spot on the grid, on the other hand, was Patrick Jacobsen (MV Agusta Reparto Corse) who moved into the race lead ahead of Jules Cluzel (CIA Landford Insurance Honda) and Lucas Mahias (GRT Yamaha Official WorldSSP team). During the third lap the race lost Kyle Ryde (Kawasaki Puccetti Racing) who crashed out and was forced to retire. In the meantime, the French Honda rider became the new race leader, followed by his Yamaha riding compatriot and the Turkish Kawasaki rider, Kenan Sofuoglu who all managed to overtake Jacobsen. On the sixth lap, Mahias managed to overtake Cluzel for the lead and shortly thereafter Sofuoglu also overtook the Championship leader to move in behind Cluzel. However, on the eighth lap, Kenan Sofuoglu took back the race leadthat he had lost at the start and held onto it for the rest of the distance, finishing first ahead of Frenchmen Lucas Mahias and Jules Cluzel. With this win, Sofuoglu moves into the championship lead with a 4-point advantage ahead of Mahias and 31 ahead of Sheridan Morais.

The FIM Supersport 300 World Championship race was the first one of the day. To everyone's great surprise, the victory went to a young female rider, Spaniard Ana Carrasco who, astride her team ETG Racing Kawasaki Ninja 300, became the first woman to win a FIM Supersport 300 World Championship race. Carrasco finished on the top step of the podium ahead of Italian Alfonso Coppola (SK Racing)on Yamaha, second and Spaniard Marc García (Halcourier Racing), third and also with the Japanese manufacturer. This makes Coppola the new Championship leader with a one-point advantage over García and two races left in the season.

Before WorldSBK Race 2, the third to last race of the FIM Superstock1000 European Championship season was held. Toprak Razgatlioglu (Kawasaki Puccetti Racing) started well from the second spot on the grid, overtaking pole man Florian Marino (PATA Yamaha Official STK 1000 Team) who, after a few laps, slipped back to third place after being overtaken by Maximilian Scheib (Nuova M2 Racing). During the eleventh lap an engine failure for Marino's bike which leaked oil onto the track forced race direction to wave the red flag, thereby ending the competition. The top step of the podium went to Toprak Razgatlioglu who has now reduced his gap in the overall standings behind Michael Ruben Rinaldi, followed by Florian Marino and Maximilian Scheib.

In Race 2 of WorldSBK, the riders basically confirmed the solutions that they had already used on Saturday for Race 1. On the rear, the W0575 SC0 development solution (option B) was once again used by all the riders, whereas for the front, the only rider making a change was Marco Melandri who, instead of the standard SC1 (option B), made the switch to the V0952 SC1 development solution (option C)which was the most popular choice with the riders in Race 2.

In the WorldSSP race, the riders opted mostly for standard soft solutions, both on the front and on the rear. In particular, on the front the most popular solution was the standard SC0 (option A), chosen by twenty of the twenty-eight riders on the starting grid. For the front, rider preference was actually just about evenly divided between the standard SC1 (option A) and the W0378 SC1 development solution (option B). • Number of solutions (dry, intermediate and wet) for the WorldSBK class: 6 front and 6 rear

• Number of tyres available for each WorldSBK rider: 74, including 40 front and 34 rear Tyres selected on the starting grid of WorldSSP Race

• Number of solutions (dry, intermediate and wet) for the WorldSSP class: 5 front and 4 rear Number of tyres available for each WorldSSP rider: 48, including 25 front and 23 rear

In Portimão Kawasaki shows four-of-a-kind, winning in all four WorldSBK categories with Rea in Race 2 and Sofuoglu and WordSSP
Newsroom