In Qatar, Race 1 of the last round of WorldSBK goes to Rea on Kawasaki ahead of Ducati riders Davies and Melandri

The Northern Irishman takes the first of the races held on the Losail International Circuit, in WorldSSP Lucas Mahias will start from pole position in the race tomorrow

Under the lights of Losail International Circuit of Doha in Qatar, in Race 1 of the MOTUL FIM World Superbike Championship, newly crowned 2017 World Champion Jonathan Rea on Kawasaki took his fifteenth win of the season. The Northern Irishman with the Akashi-based manufacturer once again rode an impeccable race, first winning Superpole® and then staying in the race lead from flag to flag, finishing ahead of the Ducatis ridden by Chaz Davies and Marco Melandri. Today Superpole® was also won by Lucas Mahias (GRT Yamaha Official WorldSSP Team)who could be crowned FIM Supersport World Champion for the first time tomorrow. 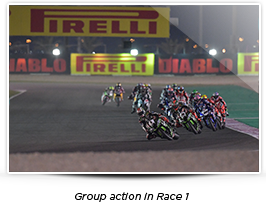 Satisfaction for Pirelli because of the performance of the tyres used in Race 1. Despite the fact that the sand on the asphalt made the surface much more abrasive and therefore harder on the tyres, in particular on the front tyres which had to “clean” the trajectory first, this did not create particular problems for the riders, thanks to the solutions brought by Pirelli which proved to perform extremely well, at the same time guaranteeing outstanding protection against the asphalt abrasiveness. Specifically, on the rear all the riders used a soft solution, whereas on the front, the most used was the V0952 development tyre, which had already gained popularity throughout the year. Race 1 had Jonathan Rea (Kawasaki Racing Team) starting from the first spot on the grid after winning Superpole®. At the start, the World Champion began well and maintained the race lead with his teammate Tom Sykes falling into second position after starting from the third spot on the grid and managing to overtake Alex Lowes (Pata Yamaha Official WorldSBK Team). 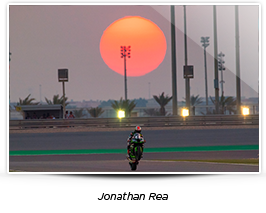 However, during the fourth lap, the Kawasaki riding Englishman was overtaken by the Yamaha rider and by Chaz Davies (Aruba.it Racing – Ducati) who moved into second place in the meantime after a third row start. At the beginning of the sixth lap, Marco Melandri (Aruba.it Racing – Ducati) and his Ducati managed to get past the Kawasaki ridden by Sykes, moving into fifth place behind the satellite Ducati ridden by Xavi Forés (BARNI Racing Team). During the seventh lap on turn nine, Michael Van Der Mark (who had started from the seventh spot on the grid) crashed and was forced to retire. In the meantime, Xavi Forés moved into third position. 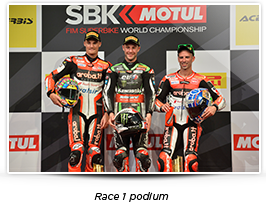 On the eleventh lap, Marco Melandri moved into fourth place by overtaking Forés who was also forced to retire. Unfortunately, during the twelfth lap, the race lost another protagonist, Alex Lowes, who crashed, ending up in the gravel. The Yamaha riding Englishman got back on the track in last place, but on the penultimate lap, a second crash forced him to retire. During the final lap there was a fabulous battle for fourth place between the Aprilia riders, Laverty and Savadori with the Northern Irishman gaining the upper hand in the end. In the end it was Jonathan Rea over the line first with a five-second advantage ahead of Chaz Davies, second, and more than ten seconds ahead of Marco Melandri, third. WorldSBK Race 1 Standings: 1) J. Rea (Kawasaki Racing Team) 2) C. Davies (Aruba.it Racing – Ducati) 3) M. Melandri (Aruba.it Racing – Ducati) 4) E. Laverty (Milwaukee Aprilia) 5) L. Savadori (Milwaukee Aprilia) 6) T. Sykes (Kawasaki Racing Team) 7) J. Torres (Althea BMW Racing Team) 8 ) S. Guintoli (Kawasaki Puccetti Racing) 9) L. Camier (MV Agusta Reparto Corse) 10) R. Ramos (Team Kawasaki Go Eleven) 11) J. Guarnoni (Pedercini Racing SC-Project) 12) J. Gagne (Red Bull Honda World Superbike Team) 13) R. Rolfo (Grillini Racing Team) 14) O. Jezek (Grillini Racing Team) RT) A. Lowes (Pata Yamaha Official WorldSBK Team) RT) X. Forés (BARNI Racing Team) RT) R. De Rosa (Althea BMW Racing Team) RT) M. Van Der Mark (Pata Yamaha Official WorldSBK Team) RT) D. Giugliano (Red Bull Honda World Superbike Team) RT) A. Andreozzi (Guandalini Racing) The Pirelli solutions chosen by the WorldSBK riders for Race 1: The rider choices for Race 1 of WorldSBK were all rather similar. On the rear, all the riders except Roberto Rolfo (who chose the standard SC1) used the soft W0575 development solution (option A) which, compared to the standard SC1, was able to guarantee more grip with temperatures like those that can be found in Qatar, even if the races are held at night. On the front, the solution that was selected by the most riders was the V0952 SC1 development tyre (option B). Jonathan Rea and Sylvain Guintoli preferred the standard SC2 (option C), whereas the Ducatis ridden by Davies and Forés went into the race with the standard SC1 (option A). 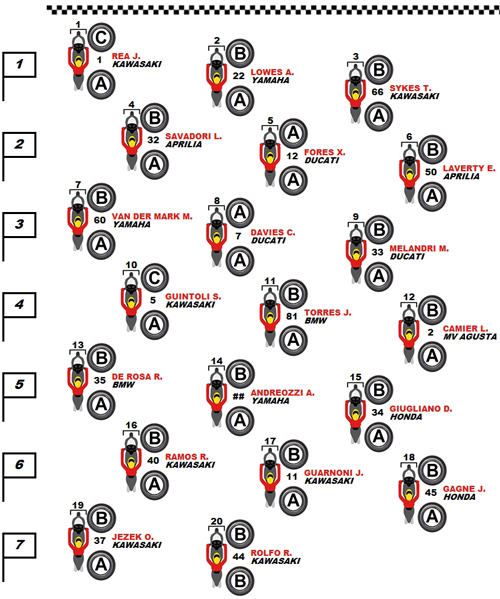 Tyres selected on the starting grid of WorldSBK Race 1

In Qatar, Race 1 of the last round of WorldSBK goes to Rea on Kawasaki ahead of Ducati riders Davies and Melandri