In Race 2 of WorldSBK, won by Chaz Davies astride Ducati ahead of the Yamahas ridden by Lowes and Van Der Mark, the Kawasaki Racing Team is crowned World Champion; all the Pirelli solutions chosen by

After the world championship title earned by Jonathan Rea, today the title arrived for the factory team from Akashi. In WorldSSP victory for Niki Tuuli but it is Lucas Mahias who gets closer to the title, García wins the WorldSSP300 and Yamaha takes the category manufacturer title, the Superstock 1000 win goes to Jérémy Guarnoni 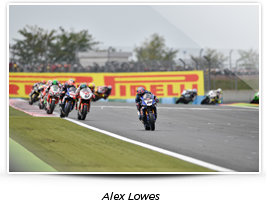 The race day today once again held thrill for all the MOTUL FIM World Superbike Championship fans. Winning Race 2 of WorldSBK on the Nevers Magny-Cours circuit was Ducati rider, Chaz Davies (Aruba.it Racing – Ducati) who, after starting from the eleventh spot on the grid, managed to claw his way back up to the top until crossing the finish line ahead of the rest. It was an unlucky race for Jonathan Rea, forced to retire, and seventh place for Tom Sykes, but the Akashi-based manufacturer took consolation in the success by the Kawasaki Racing Team which, after the world title Rea earned yesterday, was crowned 2017 team world champion today.

Kawasaki was less fortunate in the FIM Supersport World Championship due to a bad accident that occurred yesterday in Superpole for Kenan Sofuoglu which put both the rider and the team out of the running for the category title. Capitalising on the situation was Frenchman Lucas Mahias astride his Yamaha who, although unable to win the race today, is now the new leader in the overall standings. For the record, the WorldSSP Race was won by Finnish rider Niki Tuuli, also astride a bike from the Iwata-based manufacturer.

Like WorldSSP, in the FIM Supersport 300 and the European FIM Superstock 1000 World Championships, we will need to wait for the next round in Jerez de la Frontera to find out who the respective championship winners will be. At Magny-Cours, the WorldSSP300 race was won by Yamaha riding Spaniard Marc Garcia (Halcourier Racing) who now also leads in the overall standings by just 4 points over another rider from the Iwata-based manufacturer, Italian Alfonso Coppola. In the meantime Yamaha won the manufacturer title in the fledgling 300 category. In the Superstock 1000 category the win went to Jérémy Guarnoni (Pedercini Racing Kawasaki) ahead of Florian Marino (PATA Yamaha Official STK 1000 Team), second, and Federico Sandi (Berclaz Racing Team), third.

Race 2 lost one of its protagonists just a few corners in, with newly crowned World Champion Jonathan Rea (Kawasaki Racing Team) forced to retire after contact with Eugene Laverty (Milwaukee Aprilia) which injured his leg, fortunately not seriously. In the meantime, the race was very heated and Chaz Davies (Aruba.it Racing – Ducati) moved into the lead about mid-race after starting from the eleventh spot on the grid. Alex Lowes (Pata Yamaha Official WorldSBK Team) fell in behind him ahead of Leon Camier (MV Agusta Reparto Corse). During the eleventh lap, Camier was forced to retire due to a technical problem, leaving the third step of the podium to Michael Van Der Mark (Pata Yamaha Official WorldSBK Team). During the race there was a nice duel for fifth place between Leandro Mercado (IODARacing) and Marco Melandri (Aruba.it Racing – Ducati) with the Italian Ducati rider coming out on top in the end to finish fifth behind the satellite Ducati ridden by Xavi Forés (BARNI Racing Team). Finishing first was Chaz Davies ahead of Lowes on his Yamaha and Van Der Mark.

The first race of the day, which started at 11:30 AM local time, was the FIM Supersport World Championship which, unfortunately, during Superpole® on Saturday, lost one of its main protagonists: Kenan Sofuoglu (Kawasaki Puccetti Racing) who had been championship leader up to that point, suffered several fractures to his pelvis after a crash and will not be able to compete in the remaining races of the season. In the race, Niki Tuuli (Kallio Racing) started from pole position. From the start, the race appeared to be fiercely fought, with Sheridan Morais (Kallio Racing) who, battling for the championship title with Lucas Mahias (GRT Yamaha Official WorldSSP Team), overtook his teammate at the start, only to slip back to fifth position later. This left Niki Tuuli solidly in the race lead with Federico Caricasulo (GRT Yamaha Official WorldSSP Team) and Patrick Jacobsen (MV Agusta Reparto Corse) following ahead of Lucas Mahias, fourth and Sheridan Morais, fifth. In the finale, Morais slipped back to eighth position, overtaken by Cluzel, Zanetti and Canducci. Crossing the line first was Niki Tuuli astride his Yamaha ahead of another Yamaha ridden by Federico Caricasulo and the MV Agusta ridden by Jacobsen, third. The overall championship standings are now led by Lucas Mahias (GRT Yamaha Official WorldSSP Team)who has 154 points, ahead of Kenan Sofuoglu with 145 and Sheridan Morais trailing by 32 but still in the mix for the championship title.

The third race of the day was the FIM Supersport 300 World Championship. It was a thrilling and heated race down to the last lap where in the end it was Spaniard Marc García (Halcourier Racing) who triumphed ahead of Italian Alfonso Coppola (SK Racing) and Dutchman Robert Schotman (GRT Yamaha WorldSSP300 Team), all three astride YZF-R3 machines made by Yamaha who thereby has mathematically won the Supersport 300 manufacturer title. • Number of solutions (dry, intermediate and wet) for the WorldSBK class: 6 front and 7 rear

• Number of tyres available for each WorldSBK rider: 78, including 40 front and 38 rear • Number of solutions (dry, intermediate and wet) for the WorldSSP class: 5 front and 4 rear Number of tyres available for each WorldSSP rider: 50, including 28 front and 22 rear • Air temperature: 14° C • Asphalt temperature: 20° C

In Race 2 of WorldSBK, won by Chaz Davies astride Ducati ahead of the Yamahas ridden by Lowes and Van Der Mark, the Kawasaki Racing Team is crowned World Champion; all the Pirelli solutions chosen by
Newsroom