In Race 2 the Superbike riders confirm the new Pirelli rear solution and Jonathan Rea brings home a double win for Kawasaki. In Supersport the win goes to Swiss rookie Krummenacher

In the second Superbike race almost all the riders choose the U0794 development solution already used by most in Race 1, Kawasaki wins it all with victory in both Superbike races and the Supersport race 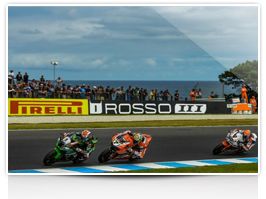 On the second race day of the MOTUL FIM World Superbike Championship, held on the Australian Phillip Island circuit, once again Pirelli confirmed the excellent performance demonstrated yesterday during Superbike Race 1, guaranteeing a quite spectacular race in Supersport as well. In Superbike, reigning champion Jonathan Rea confirmed that he is in top form and, after winning Race 1 yesterday, he also took Race 2 today, bringing home a double win for Kawasaki already in the first round of the season. The manufacturer from Akashi can also celebrate in Supersport, where Kawasaki Puccetti Team's Swiss rider Randy Krummenacher making his début in this category, brought home the win on his ZX-6R. In Race 2 it was Tom Sykes (Kawasaki Racing Team) who got off the line very well from pole position, followed by teammate Jonathan Rea and Davide Giugliano (Aruba.it Racing – Ducati), Michael Van Der Mark (Honda World Superbike Team) and Ducati rider Chaz Davies. In the 13th lap Tom Sykes went wide on a turn, losing three spots and leaving the lead to his teammate, Jonathan Rea who, however, was overtaken on the next lap by Michael Vd Mark for the lead. During the 16th lap Nicky Hayden (Honda World Superbike Team) moved into fourth place, overtaking both Tom Sykes and Davide Giugliano. There was no lack of surprises in the race finale: in the penultimate lap Chaz Davies overtook Van Der Mark and Jonathan Rea, placing himself on the virtual top step of the podium, but at the start of the last lap Jonathan Rea overtook him. In his attempt to take back the race lead, Chaz Davies, who had put in the Best Lap of the race in the fourth lap, crashed out, chucking all of his efforts up to that point in the bin. Northern Irishman Jonathan Rea was the first under the wire, achieving a splendid double win with Michael Van Der Mark behind him, followed by an excellent Davide Giugliano who managed to get past Nicky Hayden in the final turns. 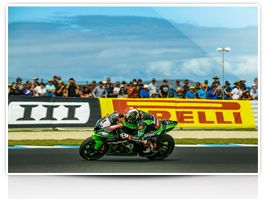 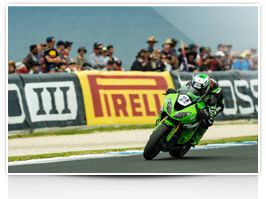 The Pirelli solutions chosen by the riders for Race 2 and Supersport: As had already happened in Race 1, once again in Race 2, despite a temperature increase of almost 10°C, the new rear, the U0794 SC1 development solution, proved to be the winning solution and was chosen by 20 of the 22 riders on the grid, also winning over those riders who had opted for the T1105 in Race 1. Sylvain Barrier and Román Ramos remained faithful to the latter solution. On the front, rider preference was split evenly between the S1699 SC1 development solution and the standard SC2. 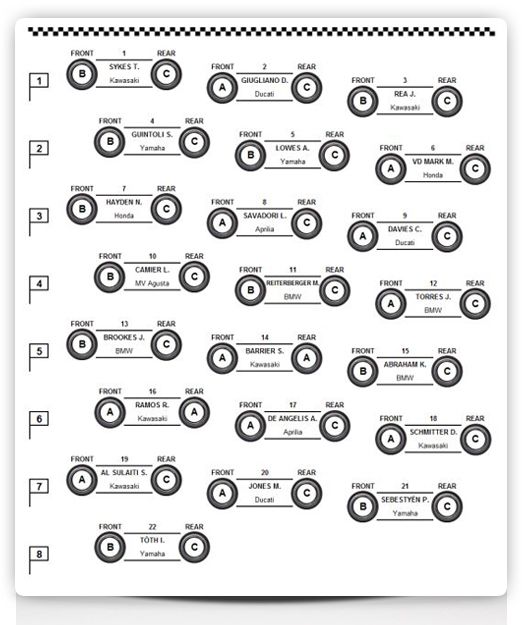 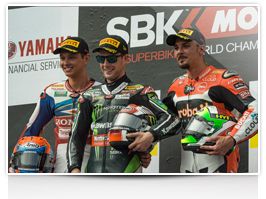