In the Pirelli Malaysian Round, the sixth stop on the eni FIM World Superbike Championship calendar, the Pirelli tyres performed brilliantly at the début on the Sepang track and two Aprilia one-two fi

In the Asian round, where the Italian tyre manufacturer was the Event Main Sponsor, the rear standard DIABLO™ Superbike e DIABLO™ Supercorsa in SC0 compound guaranteed top notch performance in both the top class and in Supersport despite the asphalt temperatures which approached 60° C The return of the eni FIM World Superbike Championship to Malaysia after a 20 year absence also marked Pirelli's début on the Sepang circuit, a round where Pirelli was the Event Main Sponsor. In spite of the high temperatures (36° C air temperature and 59° C asphalt) and the high humidity typical of the geographical area where the circuit is located, the Pirelli standard soft blend rear tyres provided excellent performance and the Aprilia riders were the ones who capitalised on them the best, taking an historic double win for the manufacturer from Noale and for Marco Melandri who won his first ever career double win. In Race 1 the Aprilia Racing Team riders brought home a fabulous one-two with Italian Marco Melandriwho, after a series of troubles and misfortunes in recent rounds, finally took his first win of the season after a dry spell that had lasted since the Moscow round last year. Behind him team mate Sylvain Guintoli who, after starting from pole position, defended the attacks by the rider from Ravenna until the tenth lap before yielding the top spot to him. Riding to the third step of the podium was Eugene Laverty (Voltcom Crescent Suzuki). Race 2 was red flagged after just three laps due to a technical problem with Claudio Corti's MV Agusta F4 RR and then reduced to 10 laps at the restart. After the restart the Aprilia riders gave the fans another grand show and once again Marco Melandri managed to get the better of his team mate, overtaking him in the last lap and crossing the finish line first again. Third place went to Tom Sykes (Kawasaki Racing Team) who, despite the pain in his hand caused by a fall in Race 1, still managed to ride to the bottom step of the podium which was enough for him to maintain his lead in the overall standings with 201. 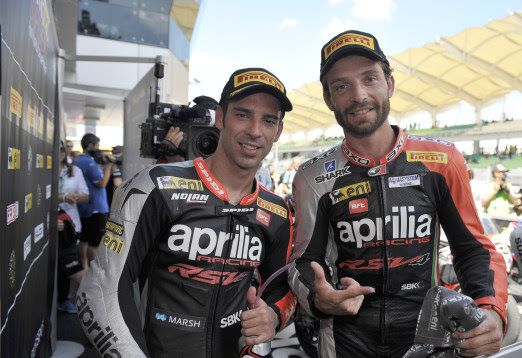 In the Supersport race Michael Vd Mark (Pata Honda World Supersport Team) took his third consecutive win of the season after the ones in Assen and Donington Park and he now leads the standings with 115, which gives him a 33 point advantage over Jules Cluzel (MV Agusta RC-Yakhnich Motorsport) who finished this race in second place. Behind the Dutchman and the Frenchman, bringing up third position, was Kenan Sofuoglu (MAHI Racing Team India) with Kev Coghlan (DMC Panavto-Yamaha) taking the Best Lap before retiring in the 9th lap. In the Manufacturer standings Honda is leading with 136 points, followed from a distance by Kawasaki at 103 points. Comment from Giorgio Barbier, Pirelli Moto Racing Director: “First of all I would like to say that we are definitely satisfied with the way our tyres performed, especially considering the fact that Sepang was a completely new circuit for us where we had never raced, or tested, not to mention the high temperature and humidity levels that make the job the tyres must do much more difficult. Despite all this, our SC0 standard solution performed quite well in both Superbike and Supersport, even allowing the riders to put in some very good lap times. We are also very pleased to have been the Event Main Sponsor for this round. I think that the promoter and Dorna did a very good job promoting the round and it was very important for us to get some better exposure in this country. We also had some of our distributors and resellers from the Asia Pacific area as our guests and I must say that their approach and the interest they demonstrated in the Championship pleasantly surprised me. They were all very anxious to learn about our products, our commitment as sole supplier and obviously what is basically a new Championship for them when you consider that 20 years have passed since the last time we raced in Malaysia. As concerns the races I would like to compliment the Aprilia riders, particularly Marco Melandri who was able to get back on the track to success. I am happy for him. He deserves it and he rode two spectacular races. Well done to Salom also, who is very consistent and who confirmed that he is the fastest EVO rider. The Championship is still very much open, so we'll see what the next rounds hold in store, starting with the Misano Adriatico round scheduled in 2 weeks' time - a round which historically has been favourable for Aprilia.” 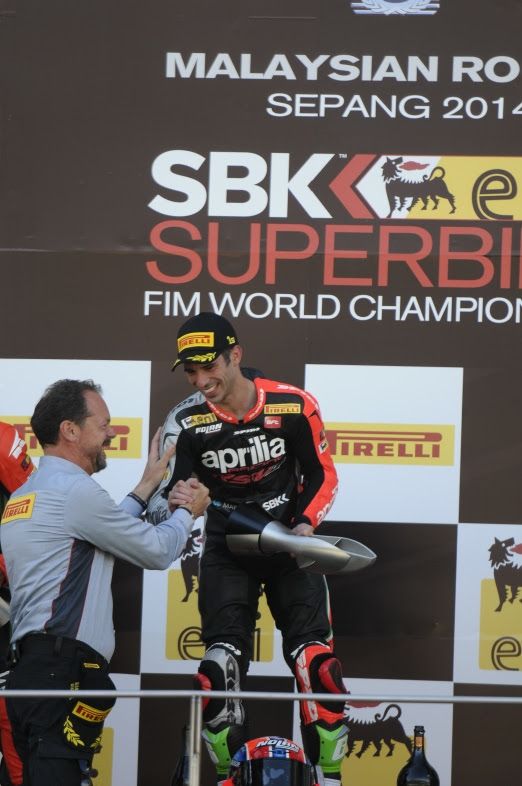 The Pirelli solutions chosen by the riders: In Superbike the race solution for the rear was the standard DIABLO™ Superbike SC0, chosen by all the riders in both Race 1 and Race 2. The SC0 is the standard soft solution, ideal for tackling smooth asphalt and high temperatures and it provides maximum contact area on smooth asphalt and maximum traction development at high temperatures, in addition to its greater performance stability under thermal decline. Since being introduced at Aragón it has been used in all the rounds so far and, in this case once again, given the asphalt temperatures that approached 60° C in both races, it proved to be an almost forced selection. On the front the most popular solution was the standard DIABLO™ Superbike SC2, chosen by about 2/3 of the riders on the starting grid. This medium-hard blend tyre is ideal for high external temperatures because it guarantees solidity to the tread band and it is usually the solution that the more aggressive riders favour as they prefer a more compact tread band. The remainder of the riders opted instead of the standard SC1 solution. In the Supersport class 21 riders out of 23 opted for the standard DIABLO™ Supercorsa SC2 solution on the front, whereas only 2 riders, Kenan Sofuoglu (MAHI Racing Team India) and Marco Bussolotti (Team Lorini), chose the standard SC1 solution. On the rear, given the high temperatures, the choice fell unanimously to the DIABLO™ Supercorsa SC0, the softest tyre in the range. Pirelli Best Lap Award: The “Pirelli Best Lap Award” is awarded by Pirelli to the rider who sets the fastest race lap. This recognition is presented by a Pirelli representative during the Paddock Show in a press conference which follows the podium at the end of the races, for a total of three awards each weekend. The time set by the fastest rider as well as his name are indicated and can be seen in the trophy. The Superbike and Supersport rider who has earned the most “Pirelli Best Lap Awards” will be elected“Best Lap Winner: fastest rider of the year” and will be awarded during the ceremony at the end of the year. At the moment the Superbike standings have Tom Sykes, Alex Lowes, Chaz Davies, Jonathan Rea, Sylvain Guintoli and Marco Melandri tied with 2 Best Lap Awards each and in Supersport Michael Vd Mark is the leader with 2 Best Lap Award won. These are the riders who won the Pirelli Best Lap Awards at Sepang: WSB Race 1 – Marco Melandri (Aprilia Racing Team), 2'04.884 (2nd lap) WSB Race 2 – Marco Melandri (Aprilia Racing Team), 2'04.991(6th lap) WSS – Kev Coghlan (DMC Panavto-Yamaha), 2’09.178 (2nd lap) 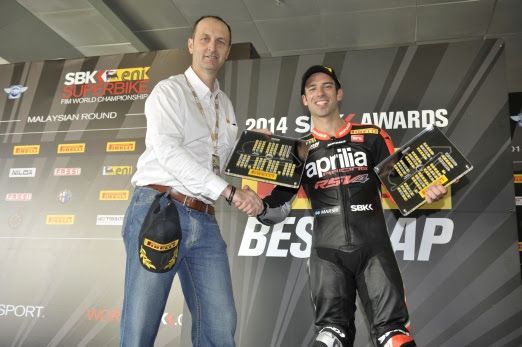 In the Pirelli Malaysian Round, the sixth stop on the eni FIM World Superbike Championship calendar, the Pirelli tyres performed brilliantly at the début on the Sepang track and two Aprilia one-two fi
Newsroom