In WorldSBK Race 1 at Misano Adriatico, it's a Kawasaki one-two with Rea and Sykes, satisfaction for Pirelli with the new rear development solutions in soft compound

On the track the green machines put on a show with a heart-stopping duel: Tom Sykes starts from the pole and sets the new track record during Superpole but the race goes to his teammate, Jonathan Rea 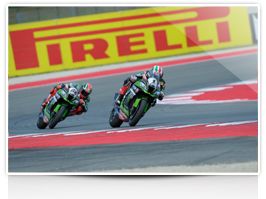 A few moments ago Race 1 of the MOTUL FIM World Superbike Championship came to an end at the Misano World Circuit Marco Simoncelli where Jonathan Rea (Kawasaki Racing Team) took the win ahead of teammate Tom Sykes, second, and Dutchman Michael van der Mark (Honda World Superbike Team), on the bottom step of the podium. The Kawasaki riders held an impressive pace throughout the race, creating a gap behind them and bringing home the sixth one-two victory of the season for the Akashi-based manufacturer, whereas, for the Northern Irish rider this is the sixth win of the year. In any case, Tom Sykes can be satisfied with his confirmation as the Superpole expert. In fact, the English rider won Superpole setting the new track lap record with a time of 1’34.037 that broke the previous record by a full two tenths of a second, also set by him in 2015. 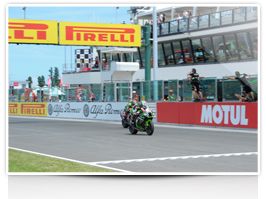 Excellent results and satisfaction for Pirelli too. The tyre manufacturer, in addition to having contributed to breaking the track lap record, received excellent feedback from the riders on the two new rear development solutions in soft compound. The solution used the most was the V0377 SC0 development tyre that made its début in the previous round at Donington Park, but the big surprise was the V0375 that had never before been used by the riders who, after testing it on Friday, placed their trust in it for the race today. This is most certainly an important result that, on one hand, highlights the excellent job done by the Pirelli Research and Development department, and on the other reaffirms how user friendly the new solutions are and how quickly the riders are able to synch with them, a typical characteristic of all Pirelli tyres which, precisely for this reason, are also chosen by amateur and non-professional riders for leisure time and track days. Race 1 was dominated from start to end by Jonathan Rea who, starting from the second spot on the grid, overtook teammate Tom Sykes when the lights went out, staying in the lead all the way to the chequered flag. 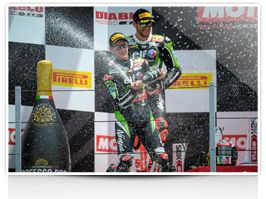 Hard luck for Lorenzo Savadori on his Aprilia, who was forced to retire on the first lap after a crash, as well as for Davide Giugliano and Nicky Hayden who left the race during the second lap. In the meantime, Rea and Sykes created a gap behind them, igniting an exciting duel which had the two of them battling for the lead within less than two tenths of one another. In the penultimate lap, the race lost another protagonist, Xavi Forés, who had started from the third spot on the grid, but all eyes were on the Kawasakis ridden by Rea and Sykes, who put on a heart-stopping show for the finale. The English rider refused to settle for second place and pulled out all the stops trying to overtake his teammate, but Rea held tough to the end, managing to cross the wire first, albeit less than a tenth of a second ahead of Sykes. Behind them, three seconds later, Michael van der Mark (Honda World Superbike Team) crossed the wire for the bottom step of the podium. Five seconds after the leader, Chaz Davies (Aruba.it Racing – Ducati) finished in fourth place, whereas all the other riders crossed the wire with a gap of more than fifteen seconds behind Jonathan Rea. Race 1 standings: 1) Jonathan Rea (Kawasaki Racing Team) 2) Tom Sykes (Kawasaki Racing Team) 3) Michael van der Mark (Honda World Superbike Team) 4) Chaz Davies (Aruba.it Racing – Ducati) 5) Jordi Torres (Althea BMW Racing Team) 6) Markus Reiterberger (Althea BMW Racing Team) 7) Niccolò Canepa (Pata Yamaha Official WorldSBK Team) 8 ) Leon Camier (MV Agusta Reparto Corse) 9) Román Ramos (Team GoEleven) 10) Anthony West (Pedercini Racing) … The Pirelli solutions chosen by the riders for Race 1: The asphalt temperature of over 40°C clearly directed the riders toward the use of soft compound solutions on the rear. More specifically, most of them opted for the V0377 SC0 development solution, which was first seen at the Donington Park round, but others also relied on the brand new V0375 SC0 development tyre that none of the riders had ever tested until yesterday. Among others, those who chose the latter solution were the Kawasaki Racing Team riders who finished the race in first and second place. As for the front, all four of the options available to the riders were used, but the favourites were mainly the standard SC2, chosen, for example, by Rea, Sykes, Hayden and Camier, and the U0176 SC1 development solution, used by Davies, Lowes and Giugliano, among others. 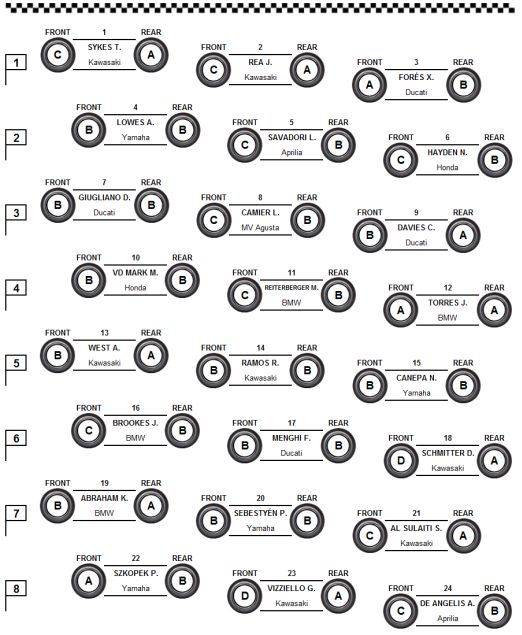 In WorldSBK Race 1 at Misano Adriatico, it's a Kawasaki one-two with Rea and Sykes, satisfaction for Pirelli with the new rear development solutions in soft compound