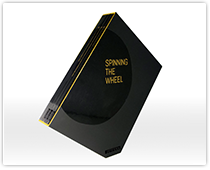 “Spinning the Wheel”, Pirelli’s Annual Report 2013, was awarded two important graphic and design prizes. The report won the Gold Trophy Award, one of the highest prizes worldwide at the International Design Awards (IDA) and also received the third prize in the category of Annual Report at the European Design Awards, held in Istanbul. Ten international talents from different fields were asked to reinvent the wheel to design the report. “Spinning the wheel” was developed in close collaboration with the Cacao Design agency and combines accurate graphics with a touch of originality, its most notable feature being a vertical tilt of 45 degrees so that the entire weight of the three volumes is supported on the lower right corner. The position is possible due to the die-cutting used in the three books and their container. The Gold Trophy Award was a great honour for the Italian company as the jury comprised some of the most influential design professionals worldwide and the report was selected among over 1,000 entrants from 52 countries for its refined, creative, innovative and functional design. The jury of the European Design Award – comprising the editors of the most well-known design publications in Europe– also awarded Pirelli’s 2013 Annual Report with the bronze medal in the annual report category, selecting it among hundreds of entrants from 21 countries. The accolades received by Pirelli highlight the company's success in innovation not only as far as its products are concerned but in the area of communication as well.   Already back in 2012, Pirelli received the Certificate of typographic excellence for the innovative approach to typography of its annual report.