It's a double win for Melandri and Aprilia at Jerez, the soft compound Pirelli DIABLO™ Superbike solutions performed well

The Andalusian sky was the backdrop for the crowning of two Champions in two FIM Supersport World Championship classes and the weekend confirmed once again that the top class for factory derivatives will not have a crowned Champion until the final round in Qatar. 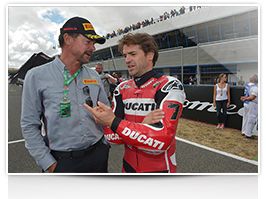 In the Supersport class, the Dutch rider for Pata Honda World Supersport Team, Michael Vd Mark, was crowned World Champion two races before the end of the Championship. The same pleasant fate was in store for Marco Faccani who won the championship title in his rookie year of Superstock 600. In Superbike an astonishing Marco Melandri (Aprilia Racing Team) took a fabulous double win with his team mate Sylvain Guintoli crossing the line behind him both times to give Aprilia a double one-two, the second of the season after Malaysia. Current leader, Tom Sykes (Kawasaki Racing Team) handled damage control with a sixth and third place finish to hold onto the lead in the championship standings with a 31 point advantage over Aprilia's Frenchman. In the manufacturer championship Aprilia is now just one point behind Kawasaki. The soft solutions that Pirelli brought for the Superbike class worked very well and the solution reserved for Superbike riders proved to be particularly popular, already seeing action during the Misano round. The top class got heated up yesterday with a Superpole that had an amazing Loris Baz (Kawasaki Racing Team) drawing the most from his rear DIABLO™ Superbike qualifier, stopping the clock at 1’40.298 to set a new track record, improving on Eugene Laverty's time from last year by 3 tenths of a second. 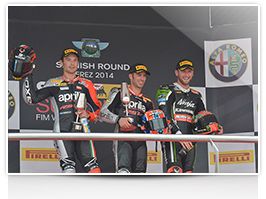 In Race 1 Sylvain Guintoli (Aprilia Racing Team) showed his claws to hang onto his hopes for the Championship title. The Frenchman, after starting from the fifth spot on the grid, made his way to the front little by little until moving into the lead. Championship leader Tom Sykes (Kawasaki Racing Team), third on the grid, was never able to get into the thick of the race and had to settle for a sixth place finish. His team mate, Loris Baz, starting from pole position, managed to keep Aprilia's Frenchman at bay for the first laps but was then overtaken and whilst making an attempt to take back the lead he crashed out in the 13th lap. In the meantime, Marco Melandri closed the gap behind team mate Sylvain Guintoli until finally overtaking him in the 16th lap. This gave Aprilia's Italian rider the win for Race 1, stealing important championship points from team mate Sylvain Guintoli, who finished the race in second place. Behind them was Ducati rider Chaz Davies (Ducati Superbike Team) with a gap of more than 4 seconds. In Race 2 the Aprilia and Kawasaki riders were once again protagonists. At the beginning of the second lap Sylvain Guintoli (Aprilia Racing Team) overtook Loris Baz to move into the lead and not long afterwards Tom Sykes (Kawasaki Racing Team) made his move to overtake his team mate, moving in behind the Frenchman from the Noale-based manufacturer. In the fourth lap Marco Melandri, Race 1 winner, took third place from Loris Baz and at mid race overtook Tom Sykes as well, settling in behind his team mate. The Aprilias began to check out at the front and the rider from Ravenna closed the gap steadily on the Frenchman until overtaking him on the final stretch just as the 15th lap started. Once again, after a brilliant comeback, Marco crossed the finish line first in front of team mate Sylvain Guintoli and Kawasaki rider Tom Sykes. The FIM Supersport World Championship race got off to a bad start for championship leader Michael Vd Mark (Pata Honda World Supersport Team) who, starting from pole position, went long at the first turn, dropping back several positions. However, the Dutchman did not give up and a few laps later he was back in the leading trio, headed up by Florian Marino (Kawasaki Intermoto Ponyexpres) with Jules Cluzel following astride his MV Agusta and the Honda rider behind him. In the eighth lap Vd Mark managed to overtake the Frenchman from the MV Agusta Reparto Corse team, but was then overtaken himself again, taking back second place only in the 11th lap. At that point the Dutchman threw himself into chasing down Marino and overtook him in the 12th lap, but the trio made up of Vd Mark, Cluzel and Marino remained locked in a constant battle. In the 16th lap, first Marino and then Cluzel moved in front of Honda's Dutchman who passed the Frenchman in the 17th lap to move into second place. The race came down to the last lap when MV Agusta's French rider, crashed out whilst attempting to overtake Marino. Michael Vd Mark took advantage of the opening and moved back into the lead, crossing the finish line first ahead of Patrick Jacobsen (second) and Florian Marino (third). 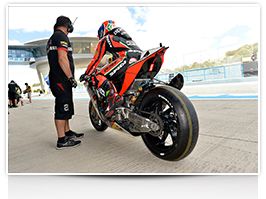 It's a double win for Melandri and Aprilia at Jerez, the soft compound Pirelli DIABLO™ Superbike solutions performed well
Newsroom