Jonathan Rea and his Kawasaki take Superpole®, fast lap and the WorldSBK Race 1 win in Portimão 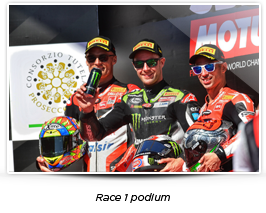 At the Autódromo Internacional Do Algarve of Portimão in Portugal, Race 1 of the MOTUL FIM World Superbike Championship just ended with a win by Kawasaki rider Jonathan Rea. The representative of the manufacturer from Akashi appeared to be fast straight away from free practice on Friday and in the morning today he easily managed to take Superpole®, considering the fact that his teammate, Tom Sykes, currently lying second in the overall standings, was knocked out of the competition for the weekend by a bad crash in the third free practice session that fractured the pinky finger on his left hand.

For the Portuguese round, also in view of the official tests scheduled for Monday, Pirelli decided to bring a mobile unit set up as an analysis laboratory to the track for the very first time in order to be able to analyse the performance of their tyres directly on site and straight away, particularly for those new development solutions that go out on the track during the weekend, but also on Monday during the tests. Based precisely on the data provided by this mobile unit on a few tyres that did long runs on Friday, Pirelli decided to pull a new rear solution from the race allocation, the W0735, which had actually never caused any problems. In fact, it had been popular with all the riders from the start but a laboratory analysis found that its wear was just over Pirelli standards. For this reason, and strictly as a precaution, Pirelli announced that this solution will not be available for the races this weekend.

Race 1 held no real surprises: Jonathan Rea (Kawasaki Racing Team), starting from the first spot on the grid, rode an error-free race where he was in the lead from flag to flag. Only the Ducati riders tried to maintain the Northern Irishman's race pace, but it was all in vain because the defending World Champion managed to finish first with an advantage of more than six seconds over Chaz Davies (Aruba.it Racing – Ducati), second, and ten ahead of Marco Melandri (Aruba.it Racing – Ducati), third. Leon Camier's performance was noteworthy, managing to finish the race in fourth place astride his MV Agusta after starting from the eleventh spot on the grid.

In Race 1, on the rear, all the riders used the W0575 SC0 development solution (option B) which had been the reference tyre for the races held at Laguna Seca and the Lausitzring. As for the front, the V0952 SC1 development tyre (option C) remained a very popular solution with the riders and in this race it was once again the most used. Choosing the W0657 super soft solution (option A) were primarily the Ducati riders, with the exception of Marco Melandri who made the unconventional choice of opting for the standard SC1 (option B). Tyres selected on the starting grid of worldsbk Race 1

• Number of solutions (dry, intermediate and wet) for the Superbike class: 6 front and 6 rear

Number of tyres available for each Superbike rider: 74, including 40 front and 34 rear

Jonathan Rea and his Kawasaki take Superpole®, fast lap and the WorldSBK Race 1 win in Portimão