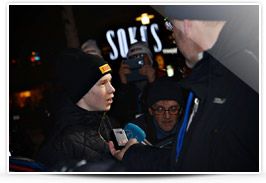 The world’s youngest rally champion is ready for his factory debut this weekend, which has been made possible with the help of Pirelli. Kalle Rovanpera from Finland, aged just 16 but already the reigning national champion in Latvia – which has special rules to allow young rally drivers to compete – is embarking on an Italian Rally Championship campaign that starts this weekend at the Rally Il Ciocco, as a factory driver for the first time. The teenager joins Peugeot Italia alongside multiple Italian champion Paolo Andreucci, driving a 208 T16 R5 navigated by Risto Pietilainen. Pirelli has backed the record-breaking Finn since he made his first steps in rallying, giving him his World Rally Car debut at Bettega Memorial in Bologna, which he nearly won at his first attempt. Rovanpera also used Pirelli tyres to win the Latvian championship, as well as the first round of the Finnish championship this year, ensuring his place in history. Now he will continue his learning programme on Italian asphalt, where he aims to gain experience of sealed surfaces using Pirelli’s latest asphalt products. “Pirelli has been an important presence in my career, right from the very beginning,” said Rovanpera, whose famous father Harri also used Pirelli during his factory career on the World Rally Championship. “Without Pirelli I wouldn’t have this opportunity, so I’m very happy that I am able to continue my learning in such a fantastic environment here in Italy. My team mate is the most successful driver in the Italian championship and the team has a track record like no other. Thanks to the support from Pirelli’s engineers I have learned so much already about how to get the best out of the P Zero asphalt tyres, and I am looking forward to adding to my knowledge in the future.” Pirelli rally activity manager Terenzio Testoni has followed Kalle Rovanpera from the very beginning of his career. “It’s clear to me that Kalle has a special talent,” he said. “So we are absolutely delighted to give him this opportunity to progress his career on the Italian championship, which is the perfect place for him to learn more about asphalt driving, as it contains some of the most challenging asphalt stages in the world. By doing this, we continue the Pirelli tradition of helping young drivers to get to the top of rallying.” Pirelli has a long history of supporting young drivers in rallying, through initiatives such as the Pirelli Star Driver scheme and WRC Academy. Thanks to these programmes, drivers such as Craig Breen, Elfyn Evans, Hayden Paddon and Ott Tanak have all secured factory drives at the top level of the World Rally Championship. Rally Il Ciocco, based in Tuscany, gets underway on Friday evening, 17 March, before the finish on Sunday afternoon (19 March). Pirelli equips the majority of the field, using the latest evolution of the P Zero RK tyre for dry conditions and Cinturato RW for rain.