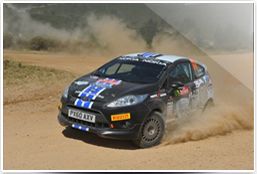 The second round of the Pirelli-supported FIA WRC Academy concluded in Sardinia on Saturday evening with a second win for Egon Kaur. The Estonian is one of 18 rising talents contesting the new-for-2011 young driver training series in identical Ford Fiesta R2s, which use Pirelli control tyres. On the all-gravel Rally d’Italia Sardegna, all Academy runners, including Kaur, found the demanding rock-strewn gravel roads a tough challenge. But the Pirelli Scorpion K4 tyres passed the test with flying colours with only one tyre failure reported throughout the event. The gravel roads of Sardinia are notoriously tough on cars. Because the Academy drivers had to follow in the path of a number of four-wheel drive machines, which churned the roads and made the conditions worse, the Academy runners faced an even greater test. Pirelli Star Driver Brendan Reeves, from Australia, said: “The conditions were very tough but the tyres held up really well. It was really loose out there but the grip the tyres gave was fantastic.” Irishman Craig Breen, another one of the six Pirelli Star Drivers in action in Sardinia, added: “The ambient and ground temperatures really soared today. There are a lot of downhill sections, but even with the heat and the engine braking, the tyres performed perfectly. I thought I would have to consider how to look after my tyres in these conditions but it wasn’t a problem at all.” Such was the tough nature of the event that only five of the 18 starters completed the opening day’s stages. Egon Kaur, who won the inaugural WRC Academy event in Portugal, lost four minutes when he went off the road on stage two. But he recovered and demonstrated his fighting qualities by clinching victory ahead of Argentine Miguel Baldoni and Swede Fredrik Ahlin, a Pirelli Star Driver. “To not only win the first two rounds of the Academy but to win today after losing four minutes yesterday is amazing,” said Kaur. “It was tricky out there but you just have to take it steady. The tyres have been excellent, I’ve felt confident and quick on them all weekend.” Paul Hembery, Pirelli’s motorsport director, said: “This is our home rally so we are delighted that the tyres performed so well for the Academy drivers. They had many challenges facing them this weekend, with lots to learn, but it seems that they looked after the tyres, and the tyres looked after them! “Our congratulations go out to all the drivers for taking on the extremely difficult challenge but continuing so professionally. Egon Kaur’s victory just shows that with confidence and determination you can still go on to win.” The next event for the Pirelli-supplied WRC Academy will be Neste Oil Rally Finland from July 28-30.