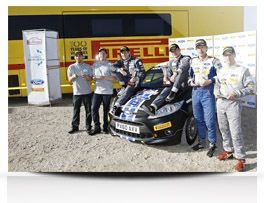 The opening round of the all-new Pirelli-supported FIA WRC Academy concluded on Vodafone Rally de Portugal on Saturday evening (March 26) and signalled the emergence of several stars of the future. Following almost 200 kilometres of demanding stage action on the gruelling gravel roads of Portugal’s Algarve region, it was Estonian Egon Kaur who shone brightest by guiding his Ford Fiesta R2, equipped with Pirelli’s K4 gravel tyre, to victory by a slender margin of 16.4 seconds over Swedish driver Victor Henriksson. Kaur was one of 18 competitors, including this year’s six Pirelli Star Drivers, who started the rally’s opening superspecial stage on closed roads in the capital Lisbon on Thursday afternoon in front of a crowd of 40,000 fans. After celebrating his victory in Faro on Saturday evening, the 23-year-old Kaur said: “The Pirelli tyres were incredible. I couldn’t believe how they lasted so well and took so much punishment on some very tough roads. Honestly, we were driving over some really big rocks and there is always a risk of a puncture in these situations. But they just kept going and were fantastic. We must say thank you to Pirelli.” Kaur won the event, but there had been numerous changes of leader, with Ireland’s Craig Breen and Britain’s Alastair Fisher both looking like potential winners before they hit trouble. WRC Academy regulations restricted each driver to 18 tyres for the entire event and the four-hour pre-rally test. Of the 360 tyres supplied by Pirelli only four suffered deflations through the entire event. Matteo Braga, Pirelli’s senior rallying tyre engineer, said: “I was really pleased with how the drivers managed their tyres and drove with a lot of intelligence on what is a very difficult rally. They understood the importance of strategy by changing the tyres and swapping them round to ensure they provided optimum performance throughout the rally.” The top Pirelli Star Driver on the event was Australian Brendan Reeves, who brought his Fiesta R2 home in fourth place on his first rally in Europe. Pirelli’s motorsport director Paul Hembery said: “What a fantastic first round for the Pirelli Star Drivers and the WRC Academy! There has been close competition, some great driving and lots of drama. We’re delighted with the way the Pirellis have worked. We’ve seen from some of the other tyre manufacturers on this event that these conditions have tested the products to the maximum, but the K4 has been exceptional. This tyre is commercially available and doesn’t have anything like the strengthening we put into the Scorpion, the tyre used so successfully by all competitors for the last three years in the WRC, but it has demonstrated tremendous performance and durability for the last two days.” As well as Kaur and Henriksson, the inaugural WRC Academy podium also included German Christian Riedemann. The next event for the Pirelli-supplied WRC Academy will be Rally d’Italia-Sardegna from May 5-8.