The manufacturer from Akashi brings home its seventh one-two finish of the season in the MOTUL FIM World Superbike Championship with the Northern Irishman once again getting the better of teammate Tom Sykes who had started from pole position, hometown hero Nicky Hayden finishes behind them astride his Honda 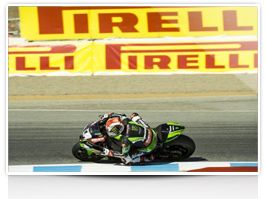 Race 1 of the MOTUL FIM World Superbike Championship ended just moments ago at the American Laguna Seca circuit. The tracks change, but Kawasaki green continues to dominate. This time it was once again the manufacturer from Akashi on pole position with Tom Sykes, followed by a brilliant one-two race finish with Jonathan Rea first and the English rider second. This result makes seven one-two finishes for Kawasaki in the 2016 season, whereas for Jonathan Rea, this is his eighth win of the year. Behind the Kawasakis were the Hondas ridden by hometown hero, Nicky Hayden in third ahead of Dutchman Michael Van der Mark. As already happened in the last round at Misano Adriatico, the 2015 World Champion left the Superpole honours to his teammate, but in the race he forgives no one and once again managed to get the better of Tom Sykes. As for the tyres brought by Pirelli, the standard SC0 rear and the S1699 SC1 front development tyre were without a doubt the most used solutions by the riders for this first race. 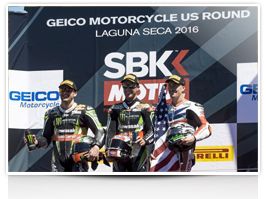 In Race 1, Chaz Davies started well astride his Ducati from the fourth spot on the grid, moving up two positions straight away and even taking the race lead during the fifth lap before crashing out into the sand. In the seventh lap, the race also ended early for his teammate Davide Giugliano, who had been riding in a provisional third place position up to that point. This left the Kawasakis ridden by Rea and Sykes alone at the front and they began to set a pace that none of the other riders could maintain. In the final laps the English rider temporarily overtook the Northern Irishman, but a few turns later Rea took back the lead. The green machines from Akashi were uncatchable for the rest, and at the wire they were more than twelve seconds ahead of Nicky Hayden, who finished third. Race 1 standings: 1) Jonathan Rea (Kawasaki Racing Team) 2) Tom Sykes (Kawasaki Racing Team) 3) Nicky Hayden (Honda World Superbike Team) 4) Michael van der Mark (Honda World Superbike Team) 5) Alex Lowes (Pata Yamaha Official WorldSBK Team) 6) Lorenzo Savadori (IodaRacing Team) 7) Xavi Forés (Barni Racing Team) 8 ) Jordi Torres (Althea BMW Racing Team) 9) Alex De Angelis (IodaRacing Team) 10) Niccolò Canepa (Pata Yamaha Official WorldSBK Team) … The Pirelli solutions chosen by the riders for Race 1: The day on Saturday was characterised by sun and heat from the early morning hours and this allowed the riders to use soft rear solutions already in the third free practice session. In Race 1, the most used rear solution was, in fact, the standard SC0, chosen by 18 of the 23 riders on the grid. Only Davide Giugliano, Niccolò Canepa, Dominic Schmitter, Pawel Szkopek and Gianluca Vizziello preferred using the T1257 SC0 development solution. As for the choices on the front, the most popular solution was the S1699 SC1 development tyre. The two Kawasaki Racing Team riders, as well as Nicky Hayden, Gianluca Vizziello and Saeed Al Sulaiti, opted instead for the standard SC2, whereas the two Aprilia riders, Savadori and De Angelis, went with the SC3 solution, as did Dominic Schmitter. 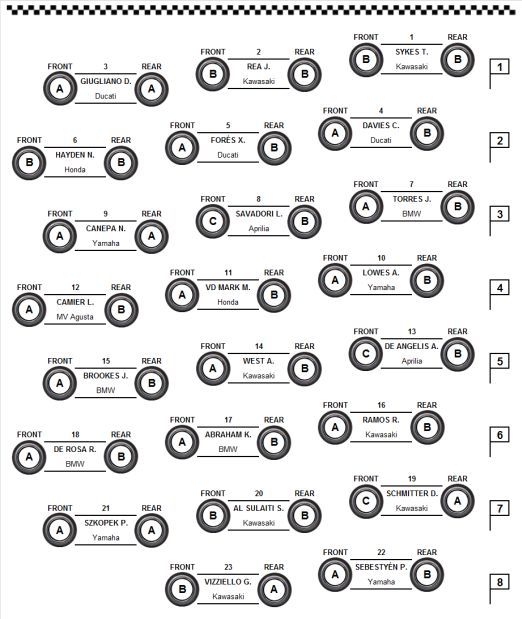