The Turkish Kawasaki rider celebrates his fifth world title, the BMW riding Italian wins the Superstock 1000 category, Spaniard Mika Perez takes the European Junior Cup, the WorldSBK battle between the two Kawasaki riders is postponed until the final round in Qatar

Today in Spain at the Jerez circuit, the championship titles for World Supersport, Superstock 1000 and the European Junior Cup were decided. Winning them were respectively Kenan Sofuoglu on his Kawasaki, Raffaele De Rosa with BMW and Spaniard Mika Perez in the single-brand Honda championship. Team Kawasaki Puccetti Racing's Kenan Sofuoglu was crowned FIM Supersport World Champion for the fifth time, also winning the WorldSSP race today. For Raffaele De Rosa (Althea BMW Racing Team), born in 1987, this is, on the other hand, his first championship title in the Superstock 1000 FIM Cup. All of the lower category championships were decided, whereas the FIM World Superbike Championship remains open. In the two races at Jerez, Chaz Davies, astride his Ducati operated by team Aruba.it Racing – Ducati to a splendid double, leaving the Kawasakis ridden by Jonathan Rea and Tom Sykes behind, but that will not be enough to finish the battle for the championship title, having accumulated a 67-point advantage over the Akashi manufacturer's Northern Irishman. The World Championship remains an in-house Kawasaki battle with Jonathan Rea who, with a third and second place finish this weekend, remains solidly at the top of the overall standings with 48 points ahead of his teammate, Tom Sykes. The two green knights will decide the outcome of the 2016 Championship in the last round at Qatar in two weeks.

This was the comment made by Giorgio Barbier, Pirelli Moto Sports Activities Director, at the end of the race weekend: “First of all, I would like to congratulate Kenan Sofuoglu, Raffaele De Rosa and Mika Perez for their success in the respective championships. It is a pity about Leandro Mercado who certainly would have been able to make a play for the Superstock1000 championship title until the end. I would also like to give Kenan a special mention for his fifth title this year, a truly important benchmark. In recent years, he has always worked to spread motorcycle racing passion in his country and to help young Turkish talents to grow. As a company, Pirelli is satisfied with the work done this weekend and more in general, throughout the year. We gathered a lot of important data and, above all, we managed to define which of the development solutions we brought this year will become the new standard tyres for 2017. In this regard, I can already reveal that, as for the DIABLO™ Supercorsa used in the Supersport, Superstock1000 and European Junior Cup categories, on the rear, the V0467 solution will become the new standard SC0 and the V0705 will become the new standard SC1. In conclusion, I would like to thank the organization of the European Junior Cup, a championship that will no longer be part of the World Superbike Championship from next year in order to make room for the new FIM Supersport300 World Championship, but that did a lot of work over the years, grooming and encouraging many young riders.” In Race 2, Jonathan Rea (Kawasaki Racing Team) started well, but his teammate, Tom Sykes and Chaz Davies (Aruba.it Racing – Ducati) started better, overtaking the Northern Irishman already halfway through the first lap, with the Ducati rider taking the lead ahead of the Akashi manufacturer's Englishman. Behind them, Nicky Hayden (Honda World Superbike Team) brought up fourth place. On the third lap, Leon Camier (MV Agusta Reparto Corse) left the race due to a technical problem and a lap later, Alex De Angelis (IodaRacing Team) followed him to pit lane after a crash. Jerez was also unforgiving to Xavi Forés, who crashed out on the ninth lap. During the tenth lap, Jonathan Rea tried to gain precious championship points, managing to overtake teammate Tom Sykes for second place. The order would stay like that for the rest of the race with Chaz Davies who, after winning Race 1 yesterday, brings home a splendid brace for Ducati, riding under the chequered flag about six second ahead of Jonathan Rea, Second, and Tom Sykes, third. The battle for the championship title is postponed to the last round in Qatar with Jonathan Rea leading the standings at 462 points, 48 ahead of teammate, Tom Sykes. Race 2 standings: 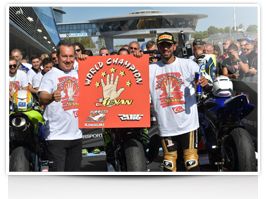 1) Chaz Davies (Aruba.it Racing – Ducati) 2) Jonathan Rea (Kawasaki Racing Team) 3) Tom Sykes (Kawasaki Racing Team) 4) Nicky Hayden (Honda World Superbike Team) 5) Sylvain Guintoli (Pata Yamaha Official WorldSBK Team) 6) Michael Van Der Mark (Honda World Superbike Team) 7) Alex Lowes (Pata Yamaha Official WorldSBK Team) 8 ) Jordi Torres (Althea BMW Racing Team) 9) Anthony West (Pedercini Racing) 10) Lorenzo Savadori (IodaRacing Team) … At 11:20, the penultimate race of the FIM Supersport World Championship got underway, with nineteen laps to race. Kenan Sofuoglu (Kawasaki Puccetti Racing) got off the line well straight away from pole position, followed closely by his teammate and potential title contender, Randy Krummenacher and Niki Tuuli (Kallio Racing) who, after starting from fourth place, overtook Jules Cluzel (MV Agusta Reparto Corse) to move up a position. As early as the fifth lap, the upset arrived when Randy Krummenacher crashed out of the race, handing Sofuoglu the 2016 championship title. But Sofuoglu would not have it easy for the rest of the race, especially since Niki Tuuli would do anything to win it. The team Kallio Racing Finn overtook the Turkish rider no less than twice, temporarily taking the lead from him, but Sofuoglu would not settle for winning the Championship but finishing the race second and in the end, he was the one to cross the line first ahead of Niki Tuuli and Kyle Smith (CIA Landlord Insurance Honda), with an excellent third place finish. And so, Kenan Sofuoglu lifts the FIM Supersport World Champion cup for the fifth time after winning in 2007, 2010, 2012 and 2015. 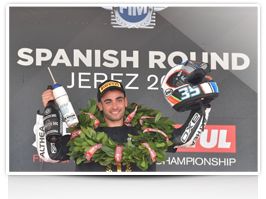 Supersport standings: 1) Kenan Sofuoglu (Kawasaki Puccetti Racing) 2) Niki Tuuli (Kallio Racing) 3) Kyle Smith (CIA Landlord Insurance Honda) 4) Patrick Jacobsen (Honda World Supersport Team) 5) Axel Bassani (San Carlo Team Italia) 6) Jules Cluzel (MV Agusta Reparto Corse) 7) Illia Mikhalchik (DS Junior Team) 8 ) Ayrton Badovini (Gemar Balloons - Team Lorini) 9) Christoffer Bergman (CIA Landlord Insurance Honda) 10) Lorenzo Zanetti (MV Agusta Reparto Corse) ... After WorldSBK Race 2, the Superstock 1000 FIM Cup race was held. Unfortunately, the race lost an important protagonists even before the start: Argentinian Leandro Mercado (Aruba.it Racing - Junior Team), who was leading the overall rider standings, had a technical problem with his Ducati during the sighting lap and was unable to take to the track for the last race of the Championship, thereby leaving the title to Italian rider Raffaele De Rosa (Althea BMW Racing Team). The latter, although he did not win the race, was in any case good enough to bridge the 7-point gap that separated him from the Argentinian and, finishing the race fifth, was crowned Superstock 1000 FIM Cup Champion with a five-point advantage over the unlucky Ducati rider. For the record, the race was won by Chilean rider Maximilian Scheib (GRAPHBIKES Easyrace SBK Team) ahead of Lucas Mahias (PATA Yamaha Official Stock Team) and Toprak Razgatioglu (Kawasaki Puccetti Racing). Finally, closing out the day was the WIL Sport European Junior Cup race that, as already mentioned, assigned the championship title to seventeen-year-old Spaniard, Mika Perez (Granshagen Racing Team). The Pirelli solutions chosen by the riders for Race 2 and Supersport: In Race 2 of WorldSBK, the most used solutions yesterday were substantially confirmed. On the front, the U0176 SC1 development tyre (option B) was still the most used solution, chosen by half the riders on the grid. Compared with Race 1, the Kawasaki riders, Tom Sykes and Jonathan Rea, decided to abandon this option in favour of the standard SC2 (option C) with which they have a better feeling. For Race 2, Davide Giugliano also decided to change up the front, relying on the S1699 development tyre (option A) that he knows better and has used more in the past. As for the rear, the V0377 SC0 development solution (option B) was once again the most popular among all the riders on the grid, with the exception of Leon Camier who chose the standard SC0 (option A) instead. In the WorldSSP race, the riders made a rather uniform choice. The prevailing race set was the standard SC1 (option A) on the front, chosen by eighteen of the thirty-one riders on the grid, whereas on the rear, almost everyone opted for the V0467 SC0 development solution (option A).