Latvala and Pirelli turn fiction to fact in NZ

Frodo Baggins, a fictional hobbit, and Jari-Matti Latvala, a fast and fearless rally driver, will never meet but they do, perhaps surprisingly, have something in common having performed starring roles in New Zealand-based dramas. Baggins, from Middle-earth, was the main character in the Lord of Rings film trilogy, which was adapted from the book by JRR Tolkien and filmed entirely on location in New Zealand. Latvala, from Finland, has notched up three wins in the World Rally Championship and claimed his most recent success on New Zealand's dramatic World Rally Championship qualifier, which finished in Auckland today (Sunday). 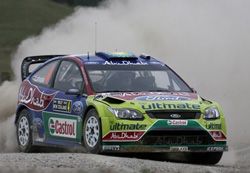 With three corners of the challenging gravel rally remaining, Sebastien Ogier was heading for his maiden WRC victory only to spin into a bank and stall the engine of his Citroen C4. His misfortune enabled Latvala to power to his first win of 2010, which also enabled his Ford team to become the most successful manufacturer in the history of the world championship with 75 wins to Lancia's 74. "It's unbelievable because I never thought this would be possible but my consistency paid off when it mattered most and I am so happy to have won," said Latvala, whose Ford Focus World Rally Car used Pirelli's hard compound Scorpion tyre, which has been designed by the company's specialist engineers to provide performance and durability in equal measure. Six-time world rally champion Sebastien Loeb had also taken a star turn in New Zealand. The French ace slid his works Citroen C4 into a bridge on Friday's fourth stage but fought back heroically from being more than 1m40s off the lead to hold the advantage after Sunday's opening stage. But another uncharacteristic mistake by Loeb on the infamous Whaanga Coast stage on Sunday morning resulted in more time being lost as well as a fourth win of the season, although he continues to top the WRC drivers' standings to the tune of 36 points. "It has been a very good rally for Pirelli with no problems and no complaints from the many drivers using our tyres here," said Pirelli engineer Matteo Braga. "This is not an easy rally because the dust on the surface can make it quite difficult with the high speeds and constantly changing cambers but we have been very pleased with how our tyres have performed. We are also very satisfied to see some different names winning." As part of its three-year agreement as the official tyre supplier to the FIA World Rally Championship, Pirelli also provides tyres to the supporting Super 2000 and Production Car World Rally Championships, of which Rally New Zealand was a counting round for both. Jari Ketomaa, driving a Ford Fiesta S2000, took the honours in the SWRC with Pirelli Star Driver Hayden Paddon first past the post in the PWRC at the wheel of his Mitsubishi Lancer E9. Paddon is contesting a selection of Production championship events in tandem with his Pirelli Star Driver programme, which resumes in Portugal later this month. "We can expect a hard and abrasive surface but also some faster stages than here so that's going to be another new challenge but one we cannot wait to take on," added Braga, part of Pirelli's 16-strong team in New Zealand. Vodafone Rally de Portugal, round six of the World Rally Championship, is based in Faro and runs from May 27-30.

Latvala and Pirelli turn fiction to fact in NZ
Newsroom

CDP CONFIRMS PIRELLI A LEADER IN THE FIGHT AGAINST CLIMATE CHANGE
PIRELLI BECOMES CO-TITLE SPONSOR OF THE MOUNTAIN BIKE TEAM TREK
PIRELLI TO SUPPLY WORLD RALLY CHAMPIONSHIP FROM 2021 TO 2024
CALENDAR OF COMPANY EVENTS FOR 2020
Pirelli is chosen as original equipment for the most powerful new naked production machines alongside key new models across all segments of the 2020 motorcycle manufacturer ranges
Australia, Bahrain, Vietnam and China – Tyre compound choices
×