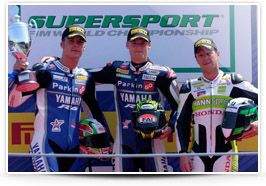 "Pirelli returned to its home circuit just a half hour from its world headquarters with a special treat: a bi-compound qualifying tyre identified by tri-colored stripes and “150th Italy” label to commemorate Italy’s national unity. Superpole was thus more memorable when Biaggi (Aprilia) rode around the Monza circuit on his Diablo Superbike tyres with the fastest average speed (204.4 km/h) in WSBK history, setting also a new track record of 1’41.745. Pirelli furnished a total of 4600 tyres comprised of 3 front and 2 rear bi-compound tyres for the SBK class and 3 front and 3 rear tyres for SSP, with the premier class requiring bi-compound rear solutions to manage Monza’s high speed turns.  Unfortunately, of the two rear tyre solutions based on previous years’ data, the softer (A) tyre was not suitable to perform entire race with the 40-45°C asphalt temperatures encountered this race weekend and were thus not utilized during either race. Superbike Race 1 saw 10 riders on the mid-soft (SC2) reference tyre, 6 on the soft (SC1), and 4 on the newer mid-soft.  In a race filled with numerous and exciting passes, it was a three-manufacturer podium with Yamaha, Aprilia and BMW, seeing even the fastest lap go to Fabrizio on his Suzuki (1'43.275). The second SBK race and the Supersport race were dominated by Yamaha, with incredible performances from Laverty, Melandri, Davies and Scass. Both of the Yamaha Superbikes topped 332.5 km/h on the main straight, just a fraction off Biaggi’s (Aprilia) top speed in Superpole. Although Ducati had difficulty in Superbike, they still had their day in the Stk1000 with a track record for Giugliano, a feat also accomplished by Yamaha in the Stk600 class" Giorgio Barbier, Racing Director, Pirelli Moto

Pirelli BEST LAP Awards: SBK Race 1 – Michel Fabrizio (Team Suzuki Alstare), 1'43.275 (Lap 3) SBK Race 2 – Max Biaggi (Aprilia Alitalia Racing), 1'43.023 (Lap 4) Total BEST LAP (SBK): Biaggi M. (Aprilia Alitalia Racing): 3, Haga N. (PATA Racing Team Aprilia): 1, Checa C. (Althea Racing): 1, Sykes T. (Kawasaki Racing Team Superbike): 1, Camier L. (Aprilia Alitalia Racing): 1, Fabrizio M. (Team Suzuki Alstare): 1 WSS – Chaz Davies (Yamaha ParkinGO Team), 1'48.526 (Lap 5) Total BEST LAP (WSS): Foret F. (HANNspree Ten Kate Honda): 1, Lowes S. (Parkalgar Honda): 1, Scassa L. (Yamaha ParkinGO Team): 1, Davies C. (Yamaha ParkinGO Team): 1 Stk1000 – Davide Giugliano (Althea Racing), 1'46.219 (Lap 4) Stk600 – Nacho Calero Perez (Orelac Racing), 1'51.557 (Lap 7) Monza lived up to its reputation for thrills and excitement yet again as a crowd of 116,500 watched Eugene Laverty win both 18-lap races in sun-kissed conditions. Laverty was a clear winner in race one, upsetting the pre-race form that had Max Biaggi down as a strong favourite for a double race victory. In race two Biaggi was on for the win at his home track but in making a misjudgment and cutting the first chicane he did not follow the rules about keeping to a certain line and re-entering the track only at permitted areas. For this infringement he was given a ride through penalty. His hopes of the win were over after losing significant amounts of time because of his ride-through, and he ended up eighth. Biaggi’s misfortune allowed the two Yamaha World Superbike riders Marco Melandri and Laverty to fight it out right to the flag, with Laverty winning and Melandri second after an audacious pass into the Parabolica. Michel Fabrizio was third in race two, on his Alstare Suzuki. World Championship leader Carlos Checa also had a dramatic day, as he scored points in each race, but was lucky to finish the second as he went from sixth to tenth when his machine developed a sudden technical problems and a trail of blue smoke was visible from its exhaust. He had been ninth in race one. Behind the podium places, Melandri, Fabrizio and Rea filled the top six in race one, with Noriyuki Haga, Troy Corser and a jubilant Ayrton Badovini inside the top six in race two. Sylvain Guintoli was seventh in race two for his Effenbert Liberty Ducati Team, the top single race Ducati finisher on the day. Checa is still the leader of the championship, but the riders immediately behind him also had changeable fortunes after Monza. Leon Haslam was a podium man in race one, but a faller in race two, along with Jonathan Rea and Ruben Xaus. Leon Camier (Aprilia Alitalia) was on course for a podium but fell at high speed in race two. 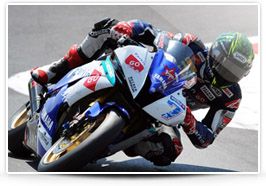 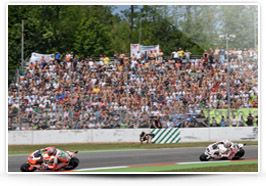 In the championship standings Carlos Checa (Althea Racing Ducati) has 145 points, Melandri 118 and Biaggi 117. Rea is fourth with 89 points and Laverty is now fifth, on 85. Race 1 A close race at times was turned into a cool-headed race win for Laverty as he stretched his rivals to breaking point in the final laps. Biaggi and Haslam took the other podium places, after some tough passes and fights between that duo and fourth place rider Melandri. Fabrizio had a strong ride on his Suzuki Alstare machine and set the fastest lap on his way to fifth place. Jonathan Rea (Castrol Honda) held off Troy Corser to earn himself a top six finish, 12 seconds from the winner. Eugene Laverty: “That was a great race, definitely not one of the easiest but I enjoyed it nonetheless. I just kept pushing to the top and my first win couldn’t have come at a better place, the Yamaha team is based at Lesmo and everyone’s here to celebrate!” 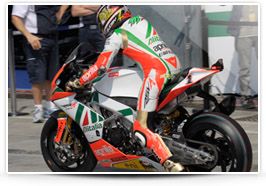 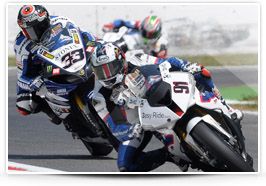 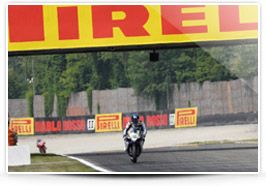