Loeb on top with Pirelli in Bulgaria

Ski runs are classified according to their level of difficulty with green runs set aside for beginners and black courses for the exclusive use of expert skiers. Borovets, Bulgaria's oldest ski resort, has 19 ski runs including the black-graded Yastrebets descent, which measures 2300 metres in length and is arguably the town's toughest course for those hoping to emulate Carlo Janka, the current overall skiing World Cup champion. 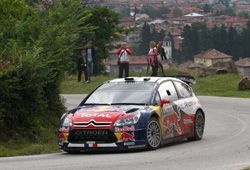 Borovets is also home to another tough course, the 354.10-kilometre route of Rally Bulgaria, round seven of the 2010 World Rally Championship, of which Pirelli is the exclusive tyre supplier under a three-year agreement with the FIA, motorsport's world governing body. Although Borovets is located high up in the Rila mountains, being early July, it's not surprising to learn that the rally used Tarmac-only runs rather than snow-coated grassy slopes. However, its lofty location means the weather can be unpredictable. During the four-day event, crews experienced bright sunshine, heavy clouds and rain, while ambient temperature variations ranged from eight degrees centigrade to 30-plus at the rally's permanent service park in Dolna Banya. It was the threat of unpredictable weather that made the availability of the soft compound Pirelli PZero tyre essential for the competing crews. On gravel events, WRC regulations restrict drivers to a pre-determined compound of Pirelli's Scorpion tyre. On asphalt events, they can choose between the hard (for dry conditions) or soft (for wet conditions) compound PZero, albeit with a restriction of 40 covers in total. In Bulgaria, they had an allocation of 34 hard compound tyres and 24 soft compound tyres, eight more than usual, following reports of possible thunderstorms. While the event was held in largely dry conditions, overnight showers and precipitation on Saturday morning's opening brace of stages forced competitors to choose between the hard and soft compound tyre and dramatically increased the challenge due to the inconsistent stage surfaces. Both types of compound use an identical tread pattern, designed to provide maximum contact with the road, but the soft version is designed to provide more grip and stability when conditions are cold and damp, while the hard provides optimum performance when the weather is warm and the road surface dry. Sebastien Loeb, who won the rally to extend his lead of the world championship to 51 points, opted for the soft compound PZero tyre for all of Saturday's six stages to counter the threat of showers. While it proved a wise move by the factory Citroen C4 driver on Saturday morning, it was less inspired in the afternoon when it remained dry. "We expected some rain so it was a safety decision because when you have water on the road the soft compound tyre is much better," said Loeb. "If it's dry we knew it would not be the best choice but we did not lose too much time because the grip under braking was still good when we used the soft compound tyre on a dry surface, although we could not be so quick through the corners because we have less lateral grip and you have to find a different rhythm for that." Sebastien Loeb took his 22nd WRC win on Pirelli tyres in Bulgaria Loeb's victory was his 58th at world championship level, the 22nd time he had triumphed in the WRC using Pirelli tyres and his seventh win on asphalt with Pirelli covers. 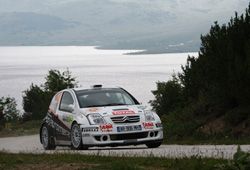 In the past, Pirelli engineers would have developed a tyre specifically for competition and for different levels of rainfall. But because the FIA specified that the asphalt tyres had to conform to everyday road use regulations, the PZero WRC cover is virtually identical to the tyres available for members of the public, albeit with even stronger sidewalls to combat the threat of punctures. Nevertheless, Loeb was quick to praise the performance of his Pirelli PZero tyres. "It's been the perfect rally for me and very good for the championship," said Loeb. "I am happy with the performance of the tyres and I was surprised that the soft was as good as it was in dry conditions when, for sure, it was not the best choice." Rally Bulgaria also marked the debut of Pirelli's new RX tyre for use by Junior World Rally Championship competitors in place of the old RS design. Using the same technology incorporated into the 18-inch RX tyre, Pirelli has produced 17- and 16-inch versions to give the competitors in the young-driver class more precision, reaction, durability and consistency, particularly on some of the longer stages (the Batak Lake stage run twice on day one measured 31.77 kilometres in length) on the rally route. Thierry Neuville, who claimed his maiden win in the JWRC class in a Citroen C2 S1600, said: "The tyre was working very well. You had a very good feeling and there is not much difference between how the tyre looked at the start and finish of the long stages. It's very good work by Pirelli." Matteo Braga, Pirelli's senior WRC tyre engineer, concluded: "We are very satisfied with how this rally has gone for us. It is a new rally and the first round of the WRC on Tarmac this season so there was increased expectation. The teams are now clear about how the soft and hard tyres perform in different conditions and this is very important. Also, Petter Solberg used the same set of tyres on Friday's stages, which covered 120 kilometres, and this shows the durability of the tyre is very good. We've seen no tyre damage or punctures although there were some junior drivers who had problems by cutting corners and hitting rocks, which broke rims rather than the tyre." A table detailing driver tyre compound choice on Rally Bulgaria is attached. The World Rally Championship resumes in Finland from July 29-31.

Loeb on top with Pirelli in Bulgaria
Newsroom