Looking forward to the Italian GP and pit stop races 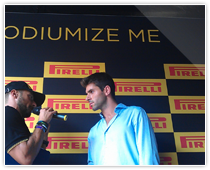 During the Italian Grand Prix (that ran from 7 to 9 September 2012) a thread united the centre of Milan and the Monza track: it was Pirelli who wove that thread. The sole supplier of tyres for the F1™ World Championship transformed the Montanelli Public Gardens in the heart of Milan into an F1™paddock where fans took part in pit-stop races with the winners mounting the podium just like their favourite drivers do. One of Pirelli's partners in this extraordinary event was Radio 101 who dedicated their transmission to the event. On race days , listeners took part in a contest to win exclusive prizes such as passes to the Paddock Club and to the stands at the Monza track. 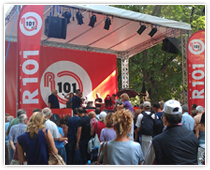 At the Monza track, Pirelli also presented the Activation Area: a showcase of Pirelli products that displays Formula One™ under the name P Zero™. In addition to the activities in Milan,  the “Batak game” was used to test drivers' reflexes and Skymagic, a sort of ski run for slalom and downhill with the player wearing PZeroTM skis. You can let your emotions run high on-line as well. By visiting www.pirelli.r101.it,  you can take part in games and quizzes and win exclusive Pirelli prizes until 23 September 2012.