Marco Melandri (BMW Motorrad Motorsport) made a real play for the 2012 eni FIM Superbike World Championship title today by putting in a double win of the highest quality, overcoming Tom Sykes (Kawasaki Racing Team) in both 20-lap contests at the classically sculpted Brno circuit. This was Melandri’s first double as an SBK rider and the first double for the official BMW team. In front of a three-day crowd of 63,129 and despite rain appearing in the morning, Melandri started from the second row in each race to overhaul long time leader Sykes. The English rider was full of fight at one of his favourite tracks, particularly in race two, but could not contain Melandri, who successfully pegged back the championship lead of Max Biaggi (Aprilia Racing) to a much more manageable 21 points, while in a historic day for BMW the German squad now heads the Manufacturers’ standings, by two points from Aprilia. "The two World Superbike Championship races on the Brno circuit confirmed that the selection of solutions we decided to bring to this round was definitely the right one, especially considering the fact that the weather conditions turned out to be quite unpredictable throughout the entire weekend. Specifically, Sunday was marked by brief showers and rather low temperatures for this time of year. In fact, Race 1 was held with an asphalt temperature of 22°C and a few sections of the track which were completely wet, while for Race 2 there was a temperature of 19° but completely dry asphalt. Both of the SC0 compound solutions for the rear were popular with the riders, particularly the brand new R874 in an oversize 200 inches profile which was chosen by about 70% of the riders. My compliments to Marco Melandri and the entire BMW Motorrad Motorsport team for the fine work they have done these past few days, moving into the manufacturer leadership. I would also like to compliment Kawasaki for their excellent placements both in Superbike and in the Supersport and Superstock 1000 classes. This year the Championship has once again proven to be very exciting: at five rounds from the end there are four riders and four teams who are very much in the running for the world title." Giorgio Barbier, Racing Director Pirelli Moto Pirelli BEST LAP Awards: SBK Race 1 – Carlos Checa (Althea Racing),  2'00.741 (Lap  20) SBK Race 2 – Tom Sykes (Kawasaki Racing Team), 1'59.728 (Lap 2) Total BEST LAP (SBK): Checa C. (Althea Racing): 6, Biaggi M. (Aprilia Racing Team): 4; Melandri M. (BMW Motorrad Motorsport): 3; Sykes T. (Kawasaki Racing Team): 3; Guintoli S. (Team Effenbert Liberty Racing): 1 WSS – Broc Parkes (Ten Kate Racing Products), 2'04.011 (Lap 7) Total BEST LAP (WSS): Lowes S. (Bogdanka PTR Honda): 2; Foret F. (Kawasaki Intermoto Step): 2; Parkes B. (Ten Kate Racing Products): 2; Lanzi L. (Prorace): 1; Sheridan Morais (Kawasaki Lorenzini): 1 Stk1000 – Robbie Brown (DMC Racing), 2’14.253 (Lap 10) Stk600 – Gauthier Duwelz (Team MTM Racing), 2'06.855  (Lap 8) Race 1 Melandri worked his way through from a mid-pack position in a race that started with many wet patches on the circuit, but finished in blazing sunshine. Sykes finished second and his team-mate, 19-year-old French rookie Loris Baz third, after a confident early few laps in tricky conditions. Any chance Sykes had of getting back at Melandri for the win was dashed when he and Jonathan Rea (Honda World Superbike Team) collided entering a corner near the end of the race and Rea crashed out spectacularly. Checa was fourth and Eugene Laverty (Aprilia Racing) fifth, with Biaggi a distant sixth. Another great ride came from Maxime Berger (Team Effenbert Liberty Racing Ducati) who led for some time in tricky early conditions and finished the race ninth at his team’s home round. 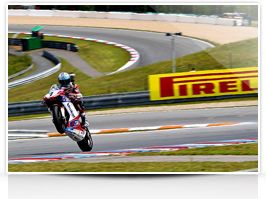 Marco Melandri: “It was an amazing race. At the beginning everyone was careful because it was wet and they were on slicks. Then I was seventh or eighth but was catching the other guys and all I had to do was keep my rhythm. When I went in front with one lap and a half to go I just had to keep pushing without thinking of the others because I knew I was faster than them.” Tom Sykes: “It was a shame to not lead the lap that counts, but I’m happy to be back on the podium with Kawasaki. At Brno you spend a lot of time on the side of the tyre but we did a great job and came away with 20 points. Unfortunately we gambled at the beginning of the race with a softer front tyre so I wasn’t able to attack the corners from 10 laps onwards, and when Marco passed me I had no answer.” Loris Baz: “It’s great and I can’t believe it! The race was just perfect for me, I knew we had a good pace in the wet so just tried to do the best possible. Then my race pace was quite good compared to the other guys, we just had some problems with the front. The last lap was not easy but I am really happy, the team did a great job”. Results: 1. Melandri (BMW) 20 Laps/108.060 km in 41'59.808 average 154.383 kph; 2. Sykes (Kawasaki) 1.360; 3. Baz (Kawasaki) 1.948; 4. Checa (Ducati) 2.494; 5. Laverty (Aprilia) 3.832; 6. Biaggi (Aprilia) 7.139; 7. Haslam (BMW) 11.293; 8. Fabrizio (BMW) 11.945; 9. Berger (Ducati) 18.988; 10. Smrz (Ducati) 19.117; etc. Race 2 Melandri scored a historic double after winning the second 20-lap race, but only by a fraction. The Italian rider made a final pass on long time leader Sykes on the final lap and had just enough of a gap in the final few corners to make sure the English rider would finish runner-up, if by only 0.140 seconds. Checa had an eventual third place finish with championship leader Biaggi a lonely fourth. Laverty won a duel for fifth with Chaz Davies (ParkinGO MTC Racing Aprilia) and Leon Haslam (BMW Motorrad Motorsport) but was unhappy not to be able to challenge for a podium place. 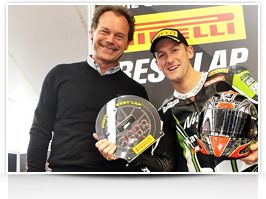 Marco Melandri: “I’m living in a dream, it’s a first time for me to get a double win! It’s something amazing at this track where nobody expected these results. It’s also fantastic to see BMW leading the constructors’ championship and it makes me very proud. No one expected we could catch Max and I’m still 21 points behind him in the table but we have to think day by day and today I’m enjoying my day!” Tom Sykes: “It’s fair to say we made another big leap forward this weekend, but unfortunately Marco spoiled my day yet again. Hopefully payback is on its way! It was a big improvement compared to what everyone expects from us. Marcel and the team made a small change for race 2 and it played its part in keeping me consistent throughout the race so it was nice to prove a few people wrong.” Carlos Checa: “Overall it was a good weekend. Race 1 was very complicated in the middle of many riders so fourth position was a good result. In race 2 I started third behind Marco and Tom but till the end I was able to keep my position. Considering this track and that we lose a lot in acceleration overall they are good results for us.” 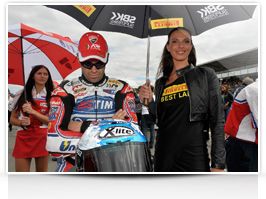