Melandri soars to the lead after Moscow thrillers

After winning race two at the all-new Moscow Raceway Marco Melandri (BMW Motorrad Motorsport) took the lead in the eni FIM Superbike World Championship for the first time in 2012, following up a second place finish in race one in perfect style. Melandri reversed the opening race finishing order as he beat Tom Sykes (Kawasaki Racing Team) by less than one second in the second intense 25-lapper in front of 32,500 enthusiastic fans. Sykes’ race 1 win was his second of 2012, following on from his success at Monza in May. Melandri had been stung by a wasp on his left leg in the first race but battled on to his podium finish, then recovered well enough to take an important lead after race two that now gives him an 18.5 point advantage over the long time championship leader, Max Biaggi (Aprilia Racing Team). Biaggi had been third in race one but no-scored in race two. 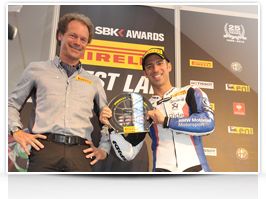 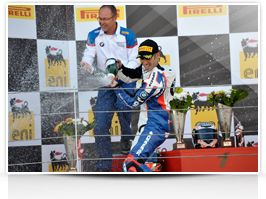 The enthusiastic and thoroughly entertained Russian race fans judged the first ever SBK event in their country a real success, even if many of the top names were to lose points after several high profile but largely injury-free crashes. Biaggi had a collision under braking with Leon Haslam (BMW Motorrad Motorsport) in race two and neither rider finished, which means that Melandri now has 308.5 points to Biaggi’s 290, with Sykes third on 267.5. Race 1 Sykes scored the first win after a faultless display of front running at a high pace. Despite damp patches on the track surface from earlier rain, his instant speed from second on the grid kept him away from the troubles many other top riders endured behind him, with crashes helping Melandri finish second. Biaggi overhauled his team-mate Eugene Laverty (Aprilia Racing Team) on the very last lap to take third place and what would prove to be important points. Potential podium riders Carlos Checa (Althea Racing Ducati), his team-mate Davide Giugliano, Chaz Davies (ParkinGO MTC Racing Aprilia), Jonathan Rea (Honda World Superbike Team) and Sylvain Guintoli (Pata Racing Team Ducati) all crashed out, with Haslam also falling then restarting to finish sixth after clashing with Chaz Davies (ParkinGO MTC Aprilia). 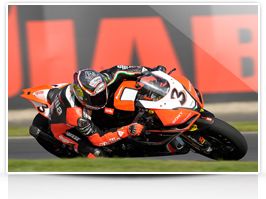 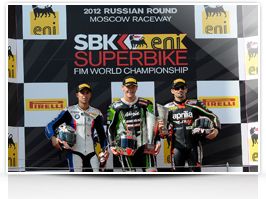 Tom Sykes: “Carlos made history yesterday with the first pole but like I’ve said all season I would certainly trade my pole for a race win and today that’s happened. Myself and Kawasaki have gone down in the history books by winning here, the race went very smoothly for myself, we did a lot of work yesterday on race tyres and today has paid off with full points.” Results: 1. Sykes (Kawasaki) 25 laps/98.275 km in 41'07.852 average 143.359 kph; 2. Melandri (BMW) 8.878; 3. Biaggi (Aprilia) 12.603; 4. Laverty (Aprilia) 13.027; 5. Fabrizio (BMW) 29.582; 6. Haslam (BMW) 30.587; 7. Canepa (Ducati) 32.170; 8. Zanetti (Ducati) 34.704; 9. Hopkins (Suzuki) 40.366; 10. Salom (Kawasaki) 41.143; etc. Race 2 Melandri was never under serious threat after he eventually took the lead in the second race, heading up Sykes by less than a second after another 25-laps of drama and incident. Sykes had been too preoccupied with the riders behind him to read his pit signals at one time and he missed out on a late chance to attack Melandri again. Davies was third after the three riders in front of him on the last lap were affected by a highside from Laverty. The Irish rider was to retire but Rea recovered from his collision with Laverty’s machine, and subsequent crash, to go seventh. The following Checa was pushed off track and dropped back to finish fourth. Leon Camier was a strong fifth for the FIXI Crescent Suzuki team, after some woes in qualifying and a heavy crash in practice. 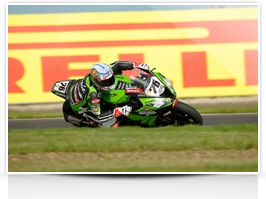 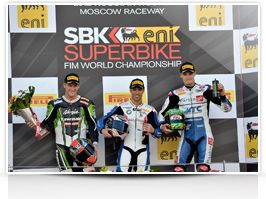 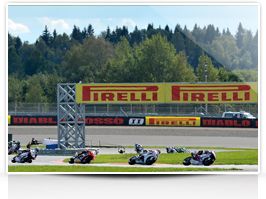 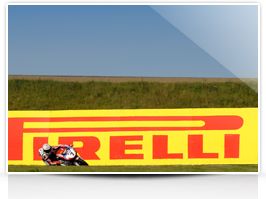 Results: 1. Sofuoglu (Kawasaki) 22 laps/86.482 km in 36'13.935 average 143.213 kph; 2. Cluzel (Honda) 5.022; 3. Leonov (Yamaha) 13.018; 4. Morais (Kawasaki) 16.504; 5. Parkes (Honda) 32.568; 6. Foret (Kawasaki) 33.854; 7. Antonelli (Yamaha) 34.377; 8. Talmacsi (Honda) 34.471; etc. Points (after 10 of 13 rounds): 1. Sofuoglu 173; 2. Cluzel 140; 3. Lowes 138; 4. Foret 128; 5. Parkes 109; 6. Morais 84; 7. Quarmby 70; 8. Baldolini 67; etc. Manufacturers: 1. Honda 217; 2. Kawasaki 212; 3. Triumph 96; 4. Yamaha 89; 5. Suzuki 6. Coppa dei Due Paesi (Two-Nations Cup) Maxim Kiselev (Dialen Honda Russia) won a wet final round of the Coppa dei Due Paesi by an impressive margin of 7.661 seconds after an early tussle with the other leading riders. He eased away from his Russian compatriot Sergey Orlov (Yamaha) to record his first win. Dakota Mamola (Yakhnich Motorsport Yamaha) was third in the race, just behind Orlov, with Slovakian rider Janez Prosenik (Japi Racing Team Yamaha) fourth. In the final championship rankings Denis Sacchetti (SD Rider Team Kawasaki) won the cup itself, 56 points to 42, ahead of Mamola. Fallen rider Sergey Vlasov lost any chance of the title thanks to his fall and ended up third overall, on 29 points. Results: 1. Kiselev (Honda); 2. Orlov (Yamaha); 3. Mamola (Yamaha); 4. Prosenik (Yamaha); 5. Sacchetti (Kawasaki); 6. Eremin (Kawasaki); Final Points: 1. Sacchetti 56 (2012 winner); 2. Mamola 42; 3. Vlasov 29; 4. Kiselev 25; 5. Biliotti 25; 6. Vostarek 22; etc. Official Tyre Supplier "The eleventh round of the World Superbike Championship held today for the first time in history in Russia, on the brand new Moscow Raceway circuit, was marked by some particularly winning races, once again shuffling the cards and upsetting the general standings. Before analysing the races I would like to offer my compliments to Infront and the Russian organisation for their hospitality and the quality of the circuit and its infrastructure: asphalt with a lot of grip, good drainage and a layout which even the riders liked a lot. As concerns the Superbike races, from the Superpole sessions on Saturday we could see how the tyres Pirelli brought for this round were capable of placing all the riders in conditions to be able to battle for the podium and victory: in fact, the first six spots on the starting grid went to six riders on bikes from different manufacturers. In particular, the rear SC1 mid-soft R302 solution confirmed the excellent performance which had already been seen on many other circuits where we’ve raced this season. This is why it was chosen by just about all the riders for both races, even in Race 1 which had been declared a wet race. My sincere compliments to Tom Sykes who quite deservedly won his second race of the year, doing justice to his 7 Superpoles of the season, as well as to Marco Melandri who, by winning Race 2, is the new ranking leader, although with three rounds left to go in the Championship anything could still happen with 4 riders still very much in contention for the world title. Congratulations also go to Vladimir Leonov and Yakhnich Motorsport team for the excellent podium earned in their home race and all the participants in the Two Countries Cup who gave us a heated and winning Championship which Denis Sacchetti deservedly won." - Giorgio Barbier, Racing Director Pirelli Moto 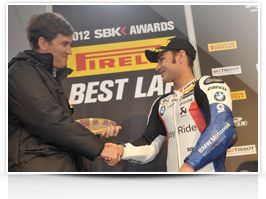 Melandri soars to the lead after Moscow thrillers
Newsroom