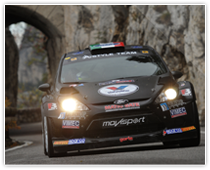 Giandomenico Basso in his Ford Fiesta RRC (Regional Rally Car) dominated the 36th running of the Mille Miglia Rally, second round of the Italian Rally Championship. Driving the new A-Style Team Fiesta on Pirelli RX9 tyres, Basso won five of the eight stages on Friday 20th April 2012. The two times European rally champion won a further three special stages on the following Saturday running Pirelli RX7 tyres. Compared to the soft RX9, the RX7 features a harder compound, but still guarantees excellent performance in cold and damp conditions. “It was a rally where the tyres played an absolutely critical role”, Basso advised. “Partly through my own experience of the event (editor’s note: Basso is winning the Mille Miglia Rally for the fourth time) and partly through the excellent advice I had from Pirelli, we always seemed to be on the right tyre. This was not an easy rally at all, and I was still learning the car, so I was very impressed with the versatility of the RX range”. Basso climbed onto the winner’s rostrum ahead of reigning Italian Champion and fellow Pirelli driver, Paolo Andreucci. Behind in third and fourth place were Umberto Scandola and Juho Hänninen, the two works drivers of the Skoda Motorsport Team not running on Pirelli tyres.