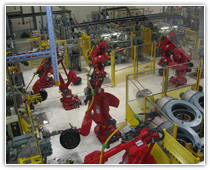 Ten million tyres for high-performance vehicles is the milestone surpassed this year by the Pirelli factories employing MIRSTM technology in Burton-on-Trent (England), Rome (Georgia, United States) and Breuberg (Germany). Implemented in 2000, the Modular Integrated Robotized SystemTM, better known as MIRSTM, is the production process for automated manufacturing of top-of-the-range Pirelli tyres. A true revolution in the sector based on continuously-updated technology resulting from more than a hundred patents developed by in-house researchers. A technology increasingly utilised when facing the challenges linked to the reduction of rolling resistance that require the use of innovative materials and solutions. 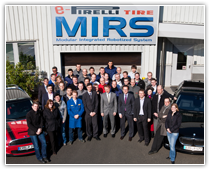 The MIRS team - Breuberg, Germany This production milestone “first and foremost represents the success of a team that, following years of work, has turned a revolutionary process into a mature industrial reality with a magnificent result”, stresses MIRS™ manager Marco Marioni. “The objective has always been global as far as financial performance is concerned, with fairly low volumes but a strong connection with original equipment fitment”. A great success, also logistically speaking, since it enjoys extremely widespread distribution despite still being a niche product. A challenge which Pirelli is able to answer thanks to the excellent flexibility provided by the MIRSTM process.