More points for Prokop in Portugal: Pirelli claims another class win in RC4 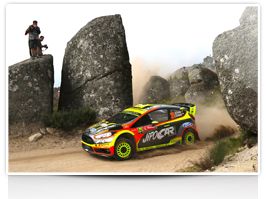 Following two rounds in the American continent, the World Rally Championship returned to Europe for the famous Rally de Portugal, where the Pirelli runners benefitted from the latest Scorpion K gravel tyres. Such was the strength as well as the performance of these Italian tyres on the tricky Portuguese event that they resisted all the punctures that befell their rivals. Pirelli driver Martin Prokop continued a strong start to his season by claiming an eighth place finish to add to his points tally, while Pirelli’s Italian junior driver Fabio Andolfi – supported also by the Italian motorsport federation (ACI) – was first in the RC4 class. Portugal is renowned as one of the most challenging events in the entire World Rally Championship, thanks to rough terrain and sharp rocks that can cause a number of punctures. Several leading runners fell victim to the conditions, but the Pirelli Scorpion K tyres proved to be remarkably resilient as well as competitive, avoiding the punctures that befell many of their rivals. Prokop was in the end Pirelli’s only representative in the leading WRC1 class: Lorenzo Bertelli was unable to take the start due to a medical problem, while Valeriy Gorban retired his Mini John Cooper Works WRC with broken suspension. In WRC2, Miguel Campos finished fifth in class on his home event: a solid result for a driver who doesn’t benefit from the regular international competition enjoyed by many others. The roughness of the Portuguese route took its toll on the two-wheel drive cars in particular, which do not have the power and traction of the top class, making Pirelli’s triumph with Andolfi in a Peugeot 208 R2 all the more remarkable. The latest evolution of the Pirelli Scorpion K tyre, in both hard and soft compounds, helped all the drivers to achieve these results by resisting punctures and increasing traction, as well as dispersing loose stones more effectively. Pirelli’s rally activity manager Terenzio Testoni commented: “We’re particularly pleased with the results for our two junior drivers, as our philosophy in rally competition is very much to help create opportunities for talented young drivers to rise to the top: the reason why we are exclusive supplier to the ERC Junior championship as well from this year. Fabio drove very well, as did Martin Prokop, who took another well-deserved points finish. On an event that was notoriously demanding for tyres, we did not encounter a single puncture, enabling all of our customers to maximise their potential and confirming the impressive showing that we already demonstrated with the Scorpion K earlier this season. In fact, these tyres have in fact not sustained one single puncture all year since their introduction.” The World Rally Championship resumes with Pirelli’s home event, Rally Italia-Sardegna, run on gravel in Sardinia from June 9-12.