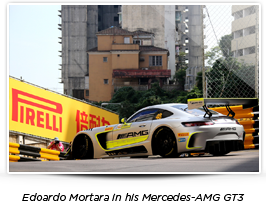 Mortara started from pole after winning Saturday’s qualification race in his Mercedes GT3, which was interrupted by an accident that eliminated six of the cars from the main race.

On Sunday morning, rain made the six-kilometre track extremely slippery. Although it stopped raining shortly before the race, the decision was taken to start the 14-car field behind a safety car, following 10 extra minutes of reconnaissance laps in the mixed conditions. They used this time to sample the Pirelli Cinturato WH tyre as well, for the very first time at Macau.

Despite the lack of grip from the track, Mortara – along with the rest of the field – chose to take the start on Pirelli’s P Zero DHD slick tyres, feeling that the warm-up and adhesion were sufficient for the 18-lap race.

The Italian maintained his advantage from start to finish, despite two safety car periods that eradicated his lead and meant that he had to ‘switch on’ his tyres once more at every restart.

The top three cars were covered by less than a second and a half at the finish, with the Audi R8 of Robin Frijns in second challenging hard. One of the most remarkable performances was from the BMW M6 of Augusto Farfus, who fought his way back up to fourth despite having to pit to repair a damaged bootlid.

In total, seven different manufacturers were represented in the highest-quality field yet seen at the FIA GT World Cup, using the same Pirelli tyres as have been seen on the Blancpain GT Series this year.

Matteo Braga, circuit technical manager, said: “The drivers benefitted from a well-known and adaptable P Zero product that allowed them to approach one of the most complex races seen in recent Macau history with confidence, despite the mixed conditions. Frijns, for example, was extremely competitive all weekend even though this was only his first visit to Macau, having used the P Zero DHD throughout this year’s Blancpain GT season. The same applies to Farfus, who made a series of strong overtaking manoeuvres on the damp parts of the track off-line on slick tyres, making it three different manufacturers in the top four.”

For more information about Pirelli in Macau, please contact Anthony Peacock on +44 7765 896 930 or anthony@mediaticaworld.com