The latest arrival dedicated to two-wheelers in the Italian tyre manufacturer's family, already certified as the highest mileage tyre in its segment, wins the sport touring comparative review conducted by the German magazine 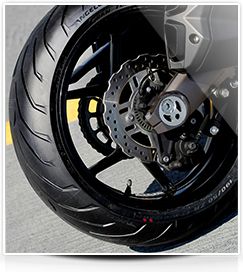 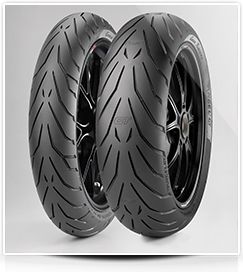 The new Angel GT, a tyre that Pirelli introduced onto the market in April and which was the star of a unique press launch on the flight deck of the Italian Navy's Aircraft Carrier Cavour, was voted the best sport touring tyre by Motorrad magazine. The 12/2013 edition of the German magazine compared the new Pirelli Angel GT to Metzeler Roadtec Z/8 Interact M/O, Bridgestone T30, Continental Road Attack 2, Dunlop Roadsmart 2 and Michelin Pilot Road 3 . All of the tyres, (120/70 ZR17 for the front and 180/55 ZR17 for the rear), were mounted on six Suzuki Bandit 1250 S bikes. The Motorrad staff took into consideration evaluation parameters such as handling, steering precision, stability in turns, stability in turns with sport riding, grip in leans, traction in acceleration, stability in a straight line, performance at maximum conditions and maintaining the line while braking in turns. Here is the final result of the comparison, which places Angel GT at the top of the list followed by Metzeler Roadtec Z8 Interact tied with Bridgestone T30 and all the other tyres which were part of the test in fourth place: 1. Pirelli Angel GT 2. Metzeler Roadtec Z8 Interact 2. Bridgestone T30 4. Continental Road Attack 2 4. Dunlop Roadsmart 2 4. Michelin Pilot Road 3 The Angel GT was dec lared the winner thanks to its top notch performance on wet roads combined with the sport characteristics which have always been a trait of the brand with the long P. In fact, the new Angel GT is the crowning jewel of the Pirelli sport touring range and the natural descendant of Angel ST, a tyre with multiple victories under its belt in comparison tests conducted by the most prestigious international motorcycling magazines, as well as holder of 7 duration world records. Compared to its predecessor, Angel GT increases mileage by 30%, reduces the braking distance by about 1 metre (at a speed of 75 kph), also improving grip and handling in the wet, and, even more importantly, manages to maintain these characteristics at a high level over time. Pirelli sums up this final characteristic with the formula "Performance Mileage". After being certified as the number one sport touring tyre for mileage by the prestigious independent agency, Motorrad TestCenter, and after the excellent reviews published in the sector's most authoritative international magazines, the result of this comparative review is further confirmation of the appreciation for Pirelli's work, once again demonstrating their ability to launch products on the market that are capable of giving the consumer an edge over the competition.