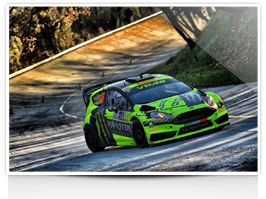 Some of motorsport’s star names from the world of bikes as well as cars will be running with Pirelli at the Monza Rally this weekend. In particular, the VR46 team will be taking part with a multiple entry of Ford Fiesta RS WRCs as well as its star driver, who is a four-time winner of the event and the defending champion. Past and present stars: Also from the world of bikes will be Tony Cairoli, an eight-time Motocross champion who has clinched his biggest successes with Pirelli. In total, between 100 and 120 cars are expected to use Pirelli tyres at the Monza Rally: an end of season rallying festival that uses a variety of different asphalt stages laid out at the famous home of the Italian Grand Prix. Previous winners of the Monza Rally with Pirelli have also included F1 star Robert Kubica and WRC factory driver Dani Sordo, as well as three-time Le Mans winner Dindo Capello. The route: The action this weekend takes place over 10 competitive stages, which include some runs over the legendary Monza banking that was used up until 1969, as well as stages run on Monza’s access roads in addition to the circuit itself. In total, there are 178.250 competitive kilometres, with the historic section – where Pirelli will also be strongly represented – covering 96.450 kilometres. The timetable: The rally starts on Friday afternoon (December 2) and concludes on Sunday lunchtime. There will be full coverage of the event on all of Pirelli’s social media channels, including live updates from the service park in the Monza paddock. The competitors: As well as the top stars, including Audi factory driver Marco Bonanomi in a Citroen DS3 WRC, Pirelli also has a number of other world-class drivers in the R5 category, just one step below the headlining World Rally Car class. Multiple Italian champion Paolo Andreucci will drive his Peugeot Italia 208 T16, while 16-year-old Finnish sensation Kalle Rovanpera will star in the Skoda Fabia R5 that he used to become the youngest-ever rally champion earlier this year, in Latvia. A leading light of the WRC3 championship, Fabio Andolfi, will additionally be reinforcing Pirelli’s philosophy of supporting the next generation of motorsport talent. Pirelli tyres will be seen on a huge variety of makes and models: including Citroen, Ford, Hyundai, Mitsubishi, Peugeot, Renault and Skoda – as well as Audi, Ford, Lancia, Mazda and Porsche in the historic section. The tyres: Pirelli will bring its entire range of asphalt rally tyres to Monza, including the latest P Zero RK tyres that have starred on the World Rally Championship and also won the European Rally Championship for the second consecutive time this year. In addition, the P7 Corsa Classic will be used for the historic cars. Wet weather tyres are also available, with the weather expected to be generally cold, plus a mix of dry and humid conditions. Quotes: Pirelli’s motorsport director Paul Hembery said: “The Monza Rally is one of the highlights of our rallying season, which is why we have chosen it to launch a new and very special product to help competitors get the most out of the sport – but more about that later, closer to the time. In terms of the actual event, it’s enough to look at the star names and cars taking part to appreciate what a festival of rallying Monza really is, in a stunning setting just half an hour from our headquarters. Rallying is at the very core of Pirelli’s values, using similar types of roads and cars that are the home of our ultra high performance road-going products, all developed using the lessons learned from competition.”