The Kawasaki Racing Team rider takes pole position and the race win after also setting the new track record at 1’26.712. The new V0377 development rear tyre most used in Race 1 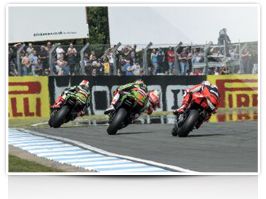 On the English Donington Park track, Brit Tom Sykes, astride his Kawasaki Racing Team Kawasaki ZX-10R won Race 1 in the MOTUL FIM World Superbike Championship, earning important Championship points. The rider from the Akashi-based manufacturer had a good day from the start: new track record for Tom Sykes in the second Superpole with an incredible time of 1’26.712, which is an improvement of almost four tenths on the previous record that he also set in 2015 at 1'27.071. In Superpole Sykes was the only rider to drop below 1’27 proving to be a flying lap specialist. On the second row of the grid, just eight tenths behind, was Ducati rider Chaz Davies (Aruba.it Racing – Ducati), followed by an excellent Lorenzo Savadori astride his IodaRacing Team Aprilia. Race 1 gave Pirelli excellent confirmation in terms of the new V0377 soft compound rear development solution, which was also used by almost all the riders on the grid. 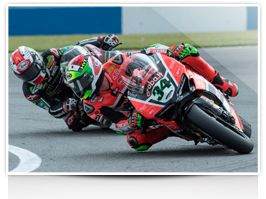 Saturday did not start off in the best of ways with the news that the Pata Yamaha Official WorldSBK Team rider Alex Lowes had been declared unfit to race due to a fractured collarbone suffered at Sepang in Race 2, despite having participating in FP1 yesterday. All the team's hopes now rested in Cameron Beaubier, subbing for Sylvain Guintoli, who impressed everyone straight away by taking the ninth spot on the starting grid. When the lights went out Chaz Davies (Aruba.it Racing – Ducati) got off to a good start, with teammate Davide Giugliano and the Kawasaki riders, Jonathan Rea and Tom Sykes right behind him, whereas Cameron Beaubier (Pata Yamaha Official WorldSBK Team) was forced to retire during the second lap. 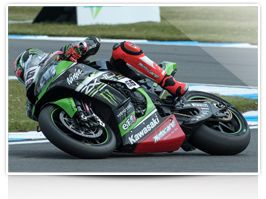 At the end of the sixth lap came an unexpected turn of events: Chaz Davies crashed but managed to get back onto the track in sixteenth place, passing the baton of race leader to Davide Giugliano. In the eighth lap Jonathan Rea went long, losing a position to Lorenzo Savadori, only to take it back a lap later. In the meantime, Alex De Angelis crashed out in the fourteenth lap, whereas another crash ended Chaz Davies' race a lap later. From the sixteenth lap on, Tom Sykes went on the attack, hunting down the lead. He made his move in the next lap, forcing Davide Giugliano out of the lead. In the end it was Tom Sykes across the wire first, followed by Italian Davide Giugliano and teammate Jonathan Rea. Race 1 standings: 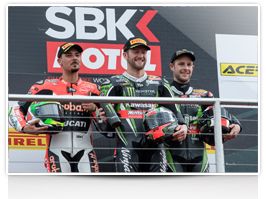 1) Tom Sykes (Kawasaki Racing Team) 2) Davide Giugliano (Aruba.it Racing – Ducati) 3) Jonathan Rea (Kawasaki Racing Team) 4) Leon Camier (MV Agusta Reparto Corse) 5) Nicky Hayden (Honda World Superbike Team) 6) Lorenzo Savadori (IodaRacing Team) 7) Jordi Torres (Althea BMW Racing Team) 8 ) Michael van der Mark (Honda World Superbike Team) 9) Karel Abraham (Milwaukee BMW) 10) Anthony West (Pedercini Racing) … The Pirelli solutions chosen by the riders for Race 1: With asphalt temperatures higher than 30 degrees Celsius, the riders' choice for the rear naturally fell to a soft solution. In particular, at Donington Park the new V0377 soft development solution, never tested by the riders until Friday, and it was by far the most used option. Those who did not choose this solution opted instead for the SC0 or, in Lussiana's case, the standard SC1. The choices for the front were more varied: the most used option was the S1699 SC1 development solution, chosen by, among others, Chaz Davies, Davide Giugliano and Jordi Torres. Other riders, such as Luca Savadori and Nicky Hayden, opted instead for the standard SC3, a new solution for the 2016 season.  Last but not least, some riders, including Kawasaki standard-bearers Jonathan Rea and Tom Sykes, used the standard SC2.