With the heavy rainfall through the early morning hours, most of the riders opted for wet tyres at the start but it was the Welsh Ducati rider who got the upper hand, riding the entire race with intermediate tyres without making a pit stop to change 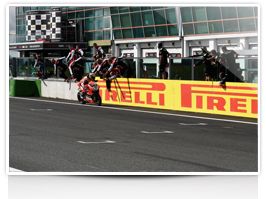 The race that just ended on the French Nevers Magny-Cours track with the win going to Ducati rider Chaz Davies (Aruba.it Racing – Ducati) was one of the most exciting of the current MOTUL FIM World Superbike season, not only because it was a heated competition and uncertain all the way to the end, but because it highlighted how fundamental tyre strategy choice is for a successful race. For Pirelli, sole supplier for all the factory derivative Championship categories, the satisfaction is even greater because the Welshman won using DIABLO™ Wet intermediate tyres which are, by their very nature, tyres that are not used very often and therefore they are not very well known or popular with the riders, but which, in track conditions with asphalt that is partially wet or completely wet but drying out, they can truly make the difference. Precisely thanks to this choice, Chaz Davies was able to ride the entire race without stopping, as most of the other riders had to, in pit lane for a tyre change. This was the comment made by Giorgio Barbier, Pirelli Moto Sports Activities Director, at the end of the race: “This was the symbolic rematch for DIABLO™ Wet, our intermediate tyres which, given their characteristics, are rarely used but precisely in the situations where they can be used, like today, they are not chosen because they are not well known. In any case, we should note that it is never easy to choose which tyre to put on when the asphalt is wet or the weather is uncertain. Today Davies made a choice that went against the current, betting everything on intermediate tyres, a bet that paid off for him. Rea, on the other hand, like his teammate Sykes, made a more conservative choice but, since he is leading the championship, he justifiably did not want to take any pointless risks.” 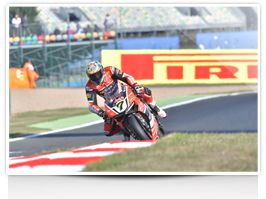 As for the race chronicle, as already mentioned, almost all the riders chose DIABLO™ Rain tyres, mounting the new wet development solution on the rear. Tom Sykes (Kawasaki Racing Team) overtook teammate Rea who had started from pole position as early as the first lap. Nicky Hayden (Honda World Superbike Team) made a pit stop during the seventh lap and opened up the tyre-change dance. During the eighth lap, Leon Camier (MV Agusta Reparto Corse) overtook Rea to move into second place and then a lap later he overtook Sykes as well for the lead. In the meantime, pit stops continued with the other riders mounting dry tyres. In the ninth lap, the Althea Racing Team riders took their turn. During the tenth lap, Lorenzo Savadori (IodaRacing Team) moved into third place, overtaking Rea, but a lap later the Northern Irishman took back the position, only to be overtaken again shortly thereafter. The two Kawasaki Racing Team riders returned to pit lane together during the twelfth lap to put on dry tyres, leaving Leon Camier in the lead with Savadori behind him and Davies in third. Savadori overtook Camier in the sixteenth lap to become the new race leader, but not long after Chaz Davies moved up from third who, thanks to his choice of intermediate tyres, did not make any pit stops to change tyres. In the penultimate lap, Michael Van Der Mark (Honda World Superbike Team) moved up from fifth place to second, whereas in the finale it was Tom Sykes who took the bottom step of the podium. Chaz Davies, after a less than brilliant start that seemed to have relegated him to tenth place, went on to win Race 1 with an advantage of almost ten seconds over the Honda Dutchman and Tom Sykes. For Chaz Davies, this is his first ever victory on the French Nevers Magny-Cours circuit and his sixth win of the season. Jonathan Rea, with a fourth place finish, limited the damage and earned precious points in the rider championship which he now leads with 406 points, 44 ahead of his teammate and 86 ahead of Chaz Davies. 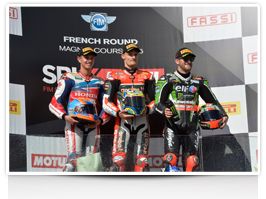 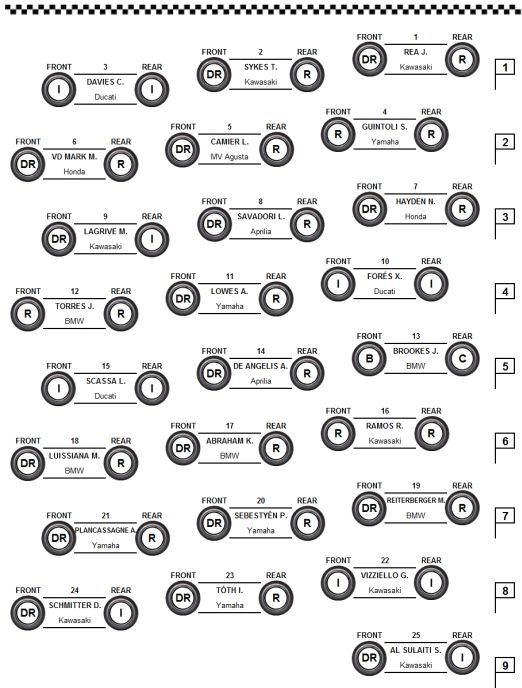