The Pirelli and Russian Technologies JV has announced the opening of a second hi-tech production line at the Voronezh facility in South-West Russia. Following investments totalling 56 million euro and a staff training programme held at Pirelli factories in Italy, Turkey and Germany, Voronezh has been transformed into one of the country’s most modern manufacturing facilities. In March 2013 it is to begin production of Premium tyre compounds, in particular for winter products. A further investment of around 44 million euro is scheduled to be made by 2015 when the factory will reach full manufacturing capacity of 4 million tyres per annum. The opening on 30th January 2013 was attended by: the Minister of Trade and Industry of the Russian Federation, Denis Manturov; the Governor of the Voronezh Region, Alexei Gordeev; the General Manager of Russian Technologies, S.V. Chemesov; and the Pirelli Chairman and CEO, Marco Tronchetti Provera. 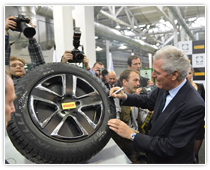 “Russia is a key strategic market for Pirelli”, Tronchetti Provera was keen to point out. “Voronezh Tyre Plant is a splendid example of cooperation between the Russian authorities, industry and the experience and technology of an international company. Besides producing Premium tyres for Russian consumers, we are also going to set up a large, efficient logistics centre at the Voronezh tyre plant that will deliver to both domestic and export customers”.

PIRELLI AND THE LAMBORGHINI COUNTACH CELEBRATE 50 YEARS TOGETHER
2021 Russian Grand Prix - Preview
PIRELLI: UN GLOBAL COMPACT LEAD CONFIRMED, THE ONLY AUTOMOBILES & PARTS SECTOR COMPANY AT THE GLOBAL LEVEL
Pirelli heads to the Jerez - Angel Nieto circuit for the tenth round of the MOTUL FIM World Superbike Championship
An eventful weekend at Montmeló: three different manufacturers win in WorldSBK; Razgatlioglu takes back the leadership in the championship standings
Ducati one-two-three in WorldSBK on the podium of the Barcelona Circuit – Catalunya with Redding, Bassani and Rinaldi; Krummenacher wins in WorldSSP