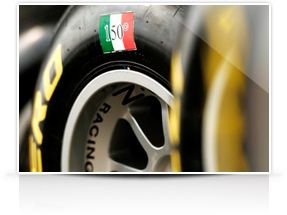 The sprint race of the final round of the 2011 GP2 Asia Series took place today at the Autodromo Dino e Enzo Ferrari, with Pirelli's medium slicks enjoying a special weekend as Italy celebrated the 150th anniversary of its unification on Thursday.  To commemorate the occasion, Pirelli's PZero tyres took to the track with a different look, featuring the Italian flag on the sidewalls.  Pirelli's Racing Manager Mario Isola commented: "As an Italian company racing on home ground at Imola we wanted to make a symbolic but significant contribution to the celebration of our country's unification. For this reason we decided to attach a label with the Italian flag and the number 150 onto the sidewalls of the tyres, to commemorate this moment in our own way." Pirelli's PZero tyres celebrate Italy's 150th anniversary at Imola The same dry and cool weather that characterised Saturday's feature race formed the backdrop to the sprint race on Sunday afternoon. Pirelli tyres completed over 25 laps of the new track configuration during the sprint race, with Dani Clos (Racing Engineering) leading from the start, followed by Fabio Leimer (Rapax) and Giedo Van der Garde (Barwa Addax). Romain Grosjean (Dams) fiercely fought for the podium finishing in fourth after having set a fastest lap of 1:28.772. Isola added: "Our PZero rubber rose to the occasion once more today, performing very well on a dry and cool track. Because of the weather conditions, we experienced a relatively low degree of tyre wear and degradation over the race weekend. With track temperatures at around 25 degrees centigrade, our rubber lasted longer than expected, especially on Saturday. And this despite the increased degree of artificial degradation we were asked to build into this year's new GP2 tyres." 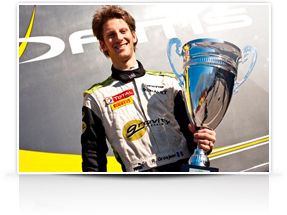 The 2011 GP2 Asia Series now draws to an end, crowning Romain Grosjean (Dams) as champion with a final total of 24 points after a perfect race weekend. The Frenchman secured his second GP2 Asia title, also putting Dams on top of the teams' standings. Pirelli's PZero GP2 tyres now head to Silverstone (Great Britain) for the first pre-season test, running from 4-6 April. Then, it will be the turn of Barcelona (Spain) to host the second official GP2 test, before the 2011 season gets underway in Istanbul (Turkey) at the beginning of May.