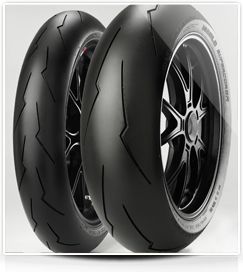 In the 120/70 ZR17 size for the front and 200/55 ZR17 for the rear, the new tyres will be used from this year in the SC2 compound version by the Superstock 1000 FIM Cup riders Multiple world Superbike champion Troy Bayliss had this to say after testing them: “Simply excellent tyres. I know Pirelli quality well, but this time they've managed to astonish me. Good job, Pirelli" The newest member of the Diablo family, introduced in a world sneak peek during EICMA 2011 at the first flagship Pzero Moda Store which opened last September in Milan, are ready to hit the track. The new tyres will take centre stage at the Autodromo Enzo and Dino Ferrari at Imola for the first Superstock 1000 FIM Cup race. In fact, from this year all the riders in this category will use the SC2 compound version of the new Pirelli Diablo Supercorsa SC tyres in sizes 120/70 ZR17 for the front and 200/55 ZR17 for the rear. 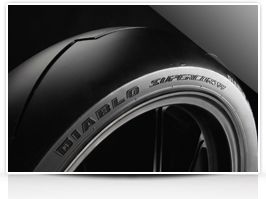 Pirelli will introduce this new tyre gradually into the top racing world with only the SC2 compound version first in the Superstock 1000 FIM Cup and only in the specified sizes. At the beginning of 2013 Pirelli will also make the SC0 and SC1 compounds available for the SC version as well as 150/60, 160/60, 180/55, 180/60, 190/55 sizes for the rear and 110/70 for the front in order to extend use of the new tyre to national championships. The new Diablo Supercorsa SC, destined solely for competition use, is the evolution of Pirelli's most victorious racing supersport product: first made in 2007, in just four years the Diablo Supercorsa won 65 victories in 18 countries and it has raced in more than 60 national and international open tyre championships in 9 countries. In fact, the new Diablo Supercorsa SC is the highest performance street legal racing tyre ever made by Pirelli, designed to hold precise racing lines on straight stretches as well as curves. It provides a profile which favours handling, less wear during track use, unparalleled grip and unprecedented racing performance. "Simply excellent tyres", was the enthusiastic comment from Troy Bayliss, the Superbike champion who had the opportunity to test them on the Yas Marina track in Abu Dhabi a few weeks ago."These tyres in the SC2 compound brought me back to an absolute total racing feel. I know Pirelli quality well, but this time they've managed to astonish me. Good job, Pirelli!" A feature which was particularly appreciated by the Australian rider is the extraordinary capacity to attack curves in braking with extreme neutrality until reaching the apex, guaranteeing grip and an absolute level of stability in the subsequent acceleration phases. 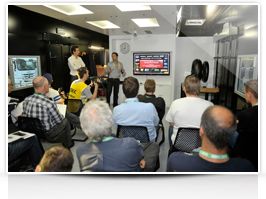 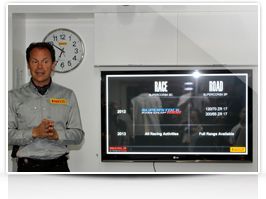 The new Diablo Supercorsa SC has an exclusive and aggressive single element tread design, which is repeated six times on the tyre surface. The result is that the “naked” area of the slick shoulders is 24% wider compared to the previous Diablo Supercorsa, increasing contact area and grip. The long longitudinal grooves which reach the tyre's shoulder from the central area of the profile ensure even wear even in the most severe use. The 200/55 ZR17 rear tyre has been completely redesigned and, compared to its predecessor from last year, has a profile which is 3 mm wider to increase the contact area, grip and rapid descent to a leaning position. However, this made it necessary to use a new structure which is able to provide greater resistance to deformation. This is why the rear tyre now has a carcass made from an innovative high module fibre, patented by Pirelli and developed in WSBK, with a considerably lower deformation index than the fibre normally used in street tyres. The result is a new carcass which is more rigid, both at the centre and in the shoulder area. This provides greater resistance to the stress created by aggressive cornering or when accelerating early out of turns with the bike still in a leaning position. The new carcass helps the bike achieve better performance each time the weight shifts from the front to the rear and vice versa, a characteristic which is even more evident as the lean angle increases. The new Diablo Supercorsa SC 120/70 ZR17 front tyre, on the other hand, has a 4 mm wider profile than last year's tyre which favours greater control and support in high speed curves and better support during braking, as well as making the ride more intuitive and holding the line more precisely. The harmony of the front and rear profiles therefore ensures greater handling and agility. The new tyre has also been available from January in the race replica SP (Sport Production) version, for now only in the sizes which will be used by the Superstock 1000 FIM Cup riders. Then, at the beginning of 2013, in addition to the SC range for professional use on the track, Pirelli will also expand the SP street legal range with the 180/55, 190/50 and 190/55 for the rear. Compared to the compound version, the Diablo Supercorsa SP offers a dual blend rear tyre in order to better adapt to street use, as well as more regular wear which favours mileage. Both Diablo Supercorsa SP and Diablo Supercorsa SC lets you personalise your tyre with special rubber labels that can be applied to dedicated spaces on the front and rear sidewalls. Each rider can create a completely customized label for these spots on the Pirelli web site and have them delivered directly to their door (service available in Europe and Australia).