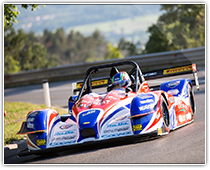 Pirelli has won the FIA European Hillclimb Championship in its first year of competition with Italian driver Simone Faggioli, the driver who helped to develop the all-new tyres. Faggioli won his eighth title at Ilirska Bistrica in Slovenia, with one round still to go. The 37-year-old, who drives a Norma M20 FC Zytek in the top class of the championship, enjoyed a masterful season, beating the course record at every circuit on the calendar to underline his leadership from start to finish. A week later, at the Reventino round, with a one race advantage at the end of the Italian hillclimb championship, Faggioli graduated for his 11th time as Italian Absolute Hillclimb Champion. The Florentine driver has now achieved 11 Italian titles and 8 European ones. The new Pirelli hillclimb tyre comes in two versions: slick (with soft and supersoft compounds available) and Cinturato rain, equipping all the classes in the sport. The tyres come in 250/575-13 and 315/660-13 sizes, using some of the techniques and technology carried over from Formula One. All these tyres proved to be victorious this year, including the rain tyres that dominated at a wet round in Switzerland. The P Zero soft tyres also won the longest hillclimb event in Europe: Trento Bondone in Italy, which is 17.3 kilometres long and climbs to an altitude of 1650 metres.