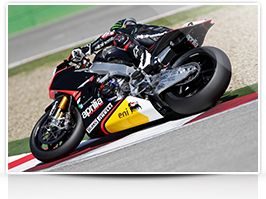 The official tests involving all the Superbike teams, except for the Kawasaki Racing Team which decided not to take part, and many of the teams of the Supersport class, were carried out today at the Enzo and Dino Ferrari International Racetrack in Imola, which yesterday hosted the seventh appointment of the eni FIM World Superbike Championship. In particular, before the start of the season, each motorcycle manufacturer proposes to the Championship promoter and to Pirelli a Superbike and a Supersport team designated for tyre development and which, during the official tests, are also given the possibility to test a number of solutions never used in races. In Superbike the “development teams” chosen by the manufacturers are Fixi Crescent Suzuki, Team Ducati Alstare, BMW Motorrad GoldBet SBK, Aprilia Racing Team, Pata Honda World Superbike and Kawasaki Racing Team; and in Supersport they are Honda PTR, ParkinGo MV Agusta Corse, Yakhnich Motorsport and MAHI Racing Team India. During the tests, the last ones scheduled for the current season, all the Superbike teams had the standard medium-hard SC2 (R982) available for the front, already used in the first seven rounds and excellent for high outside temperatures because it guarantees solidity to the tread band. For the rear both the standard SC0, the soft solution which debuted at Monza in the version with reinforced central band and which was seen in successful action also at Donington, Portimão and yesterday at Imola, and the standard medium-compound SC1 (R828). Besides these tyres the development team riders also had the standard SC1 (R426) available for the front, and for the rear five new Diablo Superbike tyres which for hardness are in the area of the SC0, having a soft compound, and differ in their structures, profiles and internal materials. These tyres were designed with a view to use in 2014 and in particular to cope with particularly high temperatures. Some of these solutions could turn out to be particularly effective on circuits such as Intercity Istanbul Park in Turkey or Phillip Island in Australia which historically have been especially tough for tyres owing to their layout and the high temperatures experienced. 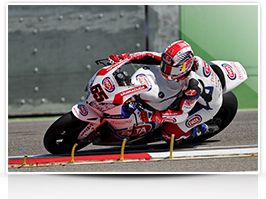 In Supersport all the riders had the Diablo Supercorsa in standard SC1 compound (P1177) available for the front, and the R303, that is the standard SC1 in medium compound, for the rear. Besides these solutions, the development teams were able to use the S753 on the front, a development solution taken only to Portimão which for compound hardness is halfway between the SC1 and the SC2, offering more stability and rigidity than the SC1 but also more grip than the SC2 and the new S0014, a development solution in SC1 medium compound designed as an alternative to the standard SC1 which makes use of a different manufacturing process. For the rear, instead, four solutions in a new SC0 compound were made available to the development team riders, again with the aim of testing tyres that could turn out to be useful in the short and long term in situations of extreme heat. 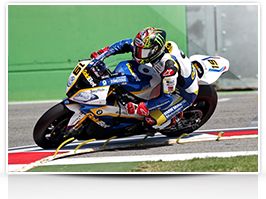 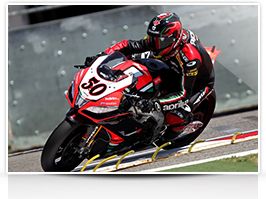 “For us the tests are a very important and fundamental moment for the development of our products” said Pirelli Motorcycle Racing Manager Giorgio Barbier “It's clear that the little time we have available for the tests doesn't help us but I'm still happy about the work done today and I thank the teams and the riders who agreed to test all the solutions we brought providing us with precious feedback. On the basis of the data collected today we'll be able to make important assessments and decide what tyres have given positive results, on which it is worth continuing to work and possibly use already in the current season.”