SCORPION™ MX dominates the seventh FIM MXGP of 2014 by monopolising both MXGP and MX2 podiums Predictions went out of the window at the MXGP Grand Prix of Spain as the slippery terrain at the Talavera de la Reina circuit south of Madrid afforded little traction or security and limited passing opportunities. The state of affairs affected championship leader Antonio Cairoli setting off with SCORPION™ MX MidSoft 32F front and rear like the other Pirelli riders, and who, due to so-so starts and exhausting trails to gain the maximum amount of positions, could only take fourth and second places in the motos. The Grand Prix was dominated by factory Suzuki rider Clement Desalle; superb, controlled and error-free in both races to record his first ‘double’ of the year and rise to second position again in the MXGP championship standings. Behind him on the podium was Yamaha Factory Racing’s Jeremy Van Horebeek; the Belgian used a SCORPION™ MX MidSoft 32F rear 120/90-19 and was runner-up for the third time in 2014 and classified ahead of another of his countryman (and Desalle’s Suzuki team-mate) Kevin Strijbos. The Pirelli quartet occupy the first four slots in the premier class with the Sicilian holding a 24 point advantage over Desalle, 28 from Van Horebeek and 84 ahead of Strijbos. Pirelli also swept the podium in MX2 with defending Champion Jeffrey Herlings posting his third consecutive double moto victory after leading the first race from start to finish and reaching the front from fifth position at the start of the second moto. He was flanked on the rostrum by CLS Kawasaki duo Dylan Ferrandis andArnaud Tonus while another Frenchman, KTM’s Jordi Tixier, was fifth overall. The SCORPION™ MX continues to be protagonists in the European EMX250 competition with EnglishmanSteven Clarke taking the overall win and consolidating his status at the top of the standings. After a free weekend ahead the FIM Motocross World Championship will gather again on May 25th at Matterley Basin for the British Grand Prix. 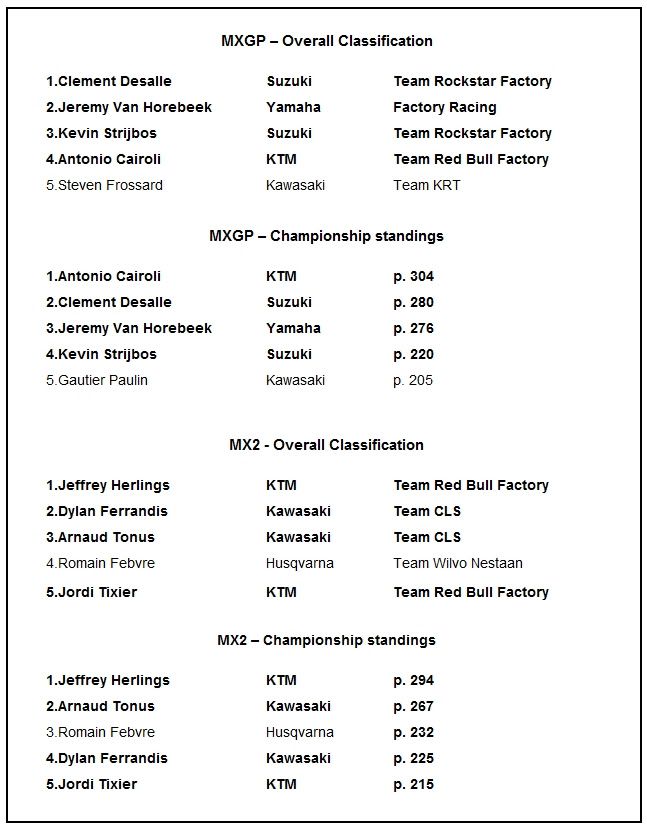