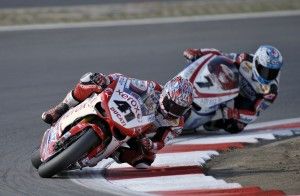 It was a pleasurable weekend for racing for Pirelli at the Nürburgring with clear skies and air temperatures around 15°C, although track temperatures varied from 25°C in Race 1 and 37°C in Race 2.  Pirelli made available 4 front and 4 rear tyre solutions for the SBK grid.  Of these, the new SC1 special compound “A” rear was popular with 80% of the grid, with SBK teams opting between the SC1 compound “A” or new SC2 special compound “C” on the front.  The SSP class was given a choice between 3 front and 2 rear tyres, of which the new “A” rear tyre was selected by 100% of the grid.  From the first qualifying sessions, the SBK lap times proved an excellent performance of the new DIABLO SUPERBIKE solutions, with Checa (Ducati) registering a new best lap, broken on Saturday with Biaggi’s (Aprilia) Superpole time of 1’54.595, nearly a second below the time set two years before.  Rea (Honda) was the fastest in race scenario, beating his own lap record from 2009 by a second and taking the Pirelli Best Lap award in both races. The versatility of the new solutions were evident: 7 manufacturers in the top 7 positions for Race 1 and 5 manufacturers in the first 5 for Race 2, with a strong performance by Kawasaki’s Tom Sykes who tied his best finish of the year (5th). Impressive improvements also with respect to overall race time, with Race 1 finishing 22 seconds faster than the previous year and 18 seconds faster in Race 2.  Local Pirelli Superstock Series winner from Heidelberg, Jan Bühn (Yamaha), was awarded a wildcard in the Superstock 600 and managed to qualify and finish in tenth position.
Newsroom