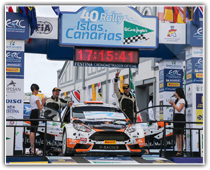 Pirelli dominated the podium overall and in the major classes at the all-asphalt Rally Islas Canarias El Corte Ingles. The Italian company clinched a one-two finish on the first round of the FIA European Rally Championship. Russian driver Alexey Lukyanuk picked up where he left off last season, by winning in the Canary Islands, having previously triumphed on the final round of the 2015 season: the Rallye du Valais in Switzerland. The Ford Fiesta R5 driver defeated Pirelli’s reigning European champion Kajto Kajetanowicz in a similar car, who had previously held the lead and pursued Lukyanuk to the finish. Only brake problems for Peugeot driver Robert Consani on the final day prevented it from being an all-Pirelli podium, from a field that included visiting WRC star Mads Ostberg. Completing the perfect start to Pirelli’s European title defence was an ERC2 win (and fifth overall) for Polish driver Wojtek Chuchala, driving for the same Subaru Poland team with which Kajetanowicz originally shot to prominence. The P Zero-equipped Mitsubishis of Peter Ranga from Hungary and Giacomo Scattolon from Italy completed a Pirelli lockout of the ERC2 podium. The performance and reliability of Pirelli’s P Zero RK rally tyres was indisputable, on an event where tyres absolutely made the difference. The weather ranged from dense fog and damp to sunshine, with an equivalent temperature variation. The asphalt also alternated between smooth and very abrasive surfaces, meaning that it was very easy to get the tyre choice wrong, as drivers evaluated how many tyres of each compound to carry in the car. The drivers had Pirelli’s P Zero RK tyres at their disposal, as used on the World Rally Championship, in hard RK5A and medium RK7A compounds.